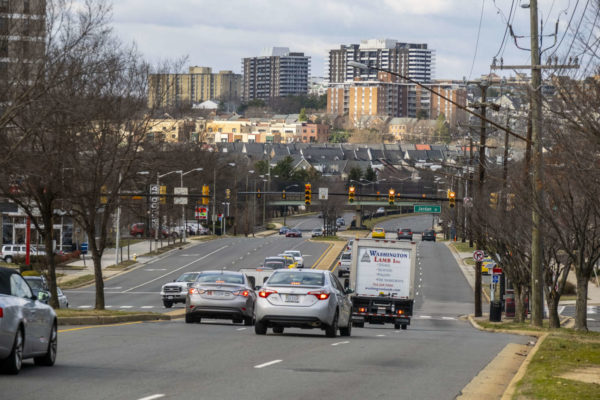 In the docket for an upcoming Transportation Commission meeting, city staff unveiled plans to open op a process to “define the future of Duke Street.”

In a 2008 Transportation Master Plan, the city identified several corridors through Alexandria as prime locations for transitways — redesigned streets to meant to emphasize high-frequency and reliable public transit. A 2012 concept plan further elaborated with a more detailed framework for what transitways would entail.

“The goal of these transitways is to deliver high capacity transit to areas of the City that are not adjacent to Metrorail,” the city report said. “These areas already see high transit ridership and are expecting significant development (as evidenced in the Small Area Plans). High capacity transit provides a means to manage congestion as well as connect residents and businesses to jobs and services within the City and throughout the region.”

The Transportation Meeting is scheduled for Wednesday, June 16.

A staff report on the project said that while transit improvements are the main focus, traffic management and bicycle/pedestrian access will also be included in the plans. The report said in November, the City Council agreed that staff needed to reevaluate

“Duke Street IN MOTION Week is the first step in that effort, which will help guide the revised plan for transit facilities and services on the corridor,” the city said.

That week of public programming is scheduled for June 21-27.

“Duke Street IN MOTION Week will include a virtual kick-off webinar on June 23, project website launch, and an online feedback form to help the team identify the communities’ needs and goals for the development of the corridor’s improvement alternatives,” the city said. “This will also include CDC compliant in-person pop-ups events and outreach to stakeholder groups and organizations along the corridor. Approximately 12 pop-ups will be hosted during Duke Street IN MOTION Week, with 6 additional pop-ups held after June 27.”

Over the summer, the staff report said the city would begin planning and working with a design consultant firm to develop conceptual plan alternatives and put together drawings and documents, with additional rounds of feedback in the fall. The total feedback period is scheduled to run for 18 months.

“The community will create a vision for this corridor to steer the eventual outcome of improvements related to public transit, such as the bus,,” the city said on the project website, “as well as other related improvements for walking, riding a bicycle, driving, and using micromobility (for example, shared electric bikes and scooters).”