After literal flooding from record-breaking rainfall and proverbial floods of frustrated local citizens, an ad hoc committee has started gathering for a multi-year overview of what’s been going wrong and needs changing regarding flood control in Alexandria.

The Ad Hoc Stormwater Utility and Flood Mitigation Advisory Group met for the first time last week and, in addition to the usual groundwork for committees, also discussed the state of the city’s stormwater projects.

City staff said the planned Sanitary Sewer Asset Renewal Program aims to cut down on backups in those areas which can lead to flooding in nearby houses. Part of the process is inspection and rehabilitation of city-owned sewers and manholes.

“When stormwater gets in to the pipes, it takes up capacity, causes basement floods,” staff said. “We’re going in there and fixing those, cutting down on backups. Work is underway now for inspections and identification, with rehabilitation taking place in 2022.” 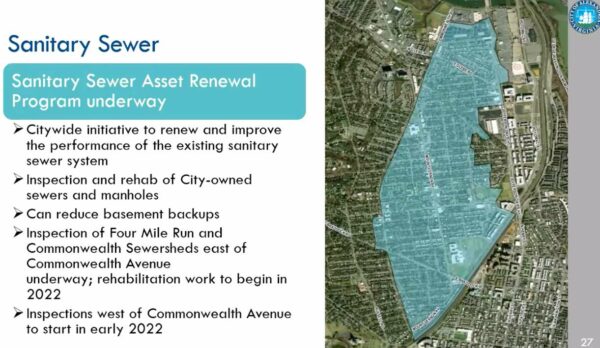 At the meeting, staff said the top three priority projects being worked on at the moment are capacity projects at Glebe Road and Commonwealth Avenue, Glebe and Ashby Street, and the Hooffs Run Culvert bypass — all areas around Del Ray, where a city heat-map of flooding indicated high levels of emergency calls. 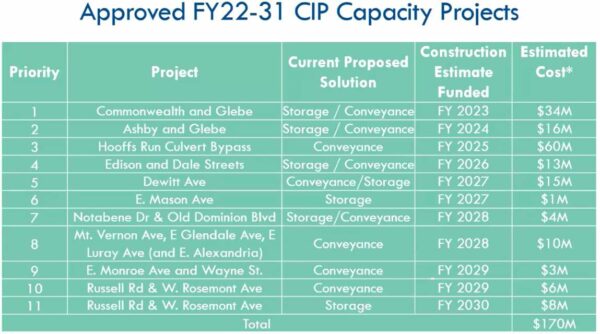 On the smaller side, the city has installed six new rain gagues, part of an effort to more accurately track rainfall.

“The network prior was pretty good, but we had folks like Russ Adams who reports out things that are happening and I had buckets sitting around seeing how much rainwater was coming in,” city staff said. “We were seeing differences in reporting of how much rainwater we had.”

Now, the city is working with FEMA on floodplain remapping, redrawing the lines of what areas are considered flooding risks. For some residents, it could mean changes in the map could mean requiring residents to buy flood insurance.

City Councilman John Chapman was at the committee’s first meeting and said it will likely become more of a permanent body as it continues its work.

“We want to work through the city language to make those proper corrections,” Chapman said. “This will be a standing committee that monitors what we do when it comes to flood mitigation. There’s a greater goal here, but we just have to go through the bureaucratic steps to knock that out.”