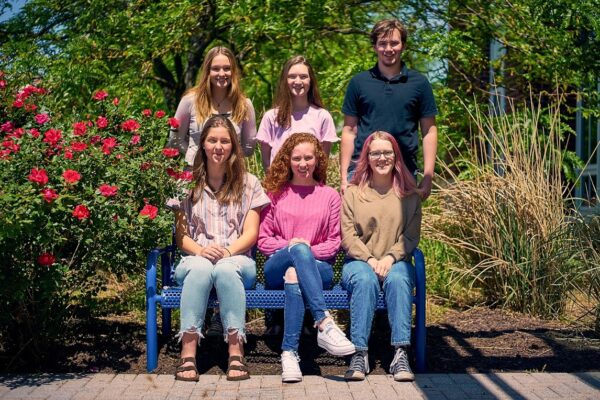 Last year, T.C. Williams High School senior Nikki Harris broke an exclusive, significant story. Superintendent Gregory Hutchings, Jr. was sending one of his children to an in-person private school at a time when ACPS was heavily in the midst of hybrid learning.

It was a shining example of the kind of independent, investigative journalism at Theogony, the high school’s student newspaper.

Harris and a team of five other student journalists will be taking the lead at the news organization next school year — a transitional period both for the newspaper and the school it covers.

The school’s name will change from T.C. Williams High School to Alexandria City High School. While the name change has been getting headlines, Theogony editors — like their peers at the renamed Washington-Liberty High School in Arlington — say the issue has been a bigger deal for adults than the student body.

“At least among people I talk to, very few people interested,” Harris said. “More were [interested] in June 2020, but [now] it’s kind of a distraction from structural issues.”

Ethan Gotsch, an incoming editor of Theogony whose column Titan Underground profiled local musicians, said the name change is just one of the big changes coming to the school.

“We’re also going to have our first Friday night lights and we’re going back to in-person instruction,” he said.

Editors at Theogony said the bigger issues within the student body — more than the name of the school — is the ongoing struggle to close the achievement gaps and the push for punishment reform within the school.

“[Outgoing editor] Bridgette [Adu-Wadier] wrote a lot about the suspension to prison pipeline, especially for students of color, and about whether teachers reflect student body,” Harris said.

Harris said while there was a relatively proportionate number of Black teachers to Black students, that was not at all the case for Latino or Hispanic students, who comprise around 40% of the student body.

Harris said the torch will be passed to the new class of editors to follow up on that and other issues of school equity.

Jacqueline Lutz, another incoming editor for Theogony, said that T.C. students are also frequently tuned in to city-wide issues.

“A lot of times what I’ve found is the issues that T.C. students face are basically local issues as well,” Lutz said. “We always try to find our T.C. angle, but also the local angle as well.”

Last November, Theogony wrote about the Taylor Run controversy, which has since become one of the talking points in the 2021 Mayoral and City Council elections. Gotsch said the local primary is another issue that’s been talked about within the school.

“As students, there is probably a limited amount of things we can do to tackle these issues,” Gotsch said, “but we do write about the Democratic primary.”

Beyond the changes coming to the school, there are also changes incoming for Theogony. The student news organization’s main readership has traditionally been its print edition, distributed through the school, but with the school shut down Theogony had to transition this past year to a more online-focused model. Now, the student news group is looking at how that balance carries over into the 2021-2022 school year.

Changing to an online model also meant changing how stories are researched and written. Lutz said part of that’s been an increasingly being involved in social media.

“We’ve had to increase our social media presence,” Lutz said. “Gotten responses from different people. We haven’t run into any legal or technical issues yet… [and] it broadens our spectrum of people we talk to.”

Gotsch discovered this first-hand in writing about student opinions on increasing the minimum wage.

“I remember asking the people who run Theogony’s Instagram to submit a poll feature on social media,” Gotsch said. “The end result: I didn’t know anyone who sent in responses. It was a good way of getting a wide variety.”

Broadening the spectrum of who in the student body is represented in Theogony, both in the newsroom and in the stories, is one of the major goals of the student editors going into next year.

“We try to encourage everyone at Theogony not to only talk to their friends, because mostly everyone at Theogony is white,” Harris said. “We try to have that not be reflected in our stories by doing things like reaching out to the International Academy… Even those who do read Theogony are sometimes not inclined to talk to Theogony, so that’s one thing I’ve struggled with at least.”

This goal is one supported by Theogony’s new faculty advisor, English teacher and T.C. alumni Kamilah Lawson. Lawson noted that she is also the first Black faculty advisor for Theogony. In the discussions headed into the upcoming year, Lawson said she’s been happy to see the editors tackling the diversity issue head-on.

“They are tough, they are on it,” Lawson said. “It’s my goal to diversify the program. They spoke about — and they are, honestly, majority white, so it will be a transition having not only a female teacher but their first African-American advisor. But I’ve done this for 13 years and I have a sports TV background. So with the excitement of a new building and new school, we’re going to keep the ball rolling.”

On the faculty side, Lawson said that’s involved meeting with populations within the school that haven’t been covered as much by Theogony in the past.

“We do not have a dearth of voices in this building,” Lawson said. “When I was offered this position, I hit the ground running. I met with Black Student Alliance, I reached out to the International Academy. Our newspaper should look like our student body, one of my first goals is to make it so. I’m actively recruiting. We’ve got to make it happen, and there’s no reason we can’t.”

One of the potential challenges for journalists in Theogony could be concerns about being censored. The articles — including the one breaking the news that Hutchings sent his child to an in-person private school — are posted on the ACPS website. But Harris said the school administration — particularly Principal Peter Balas — has been supportive and appropriately hands-off.

“ACPS is supportive,” Harris said. “I know in the past, like with Superintendent story, Mr. Balas likes to see the story in advance and know the story is being published, but it’s never rejected. We don’t get any suppression, we just have to be respectful.”

Harris said Balas only oversees some of the “touchy” issues, like a 2018 story about International Academy students dropping out to avoid being deported, and even then didn’t make edits to try and soften the impact.

“Especially outside of the school system, people respect us,” Harris said. “Sometimes people try to get questions in advance, but I think people mostly respect us and treat us with legitimacy.”