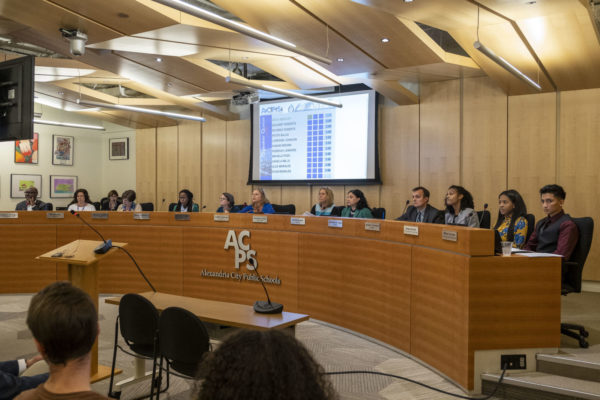 As the start of a long path to achieving equity in the schools, the School Board took a look at the sometimes startling figures behind who is being left behind in the current school system. The Board reviewed the data on suspensions, absenteeism, graduation rates and more at a work session on Tuesday (Dec. 17).

While the workshop also focused on racial disparities in the school system, the data made it clear the single largest determining factor was economic status.

Economically disadvantaged (EcDis) students comprise 61% of the student population, according to data from ACPS.

From the earliest grades, ACPS studies showed that EcDis students fell behind their peers in self-regulation and social skills. Those disparities became exacerbated as the students progress through the school system. The average pass rate for SOL tests in all subjects was around 70%, but for EcDis students those hovered around the mid-50% or 60% range.

“Not only are [EcDis students] not coming to school, but we are actively keeping them out of school,” said School Board Member Meagan Alderton. “If they have out of school suspensions, we are suspending them. So we are also causing them to be out of school.”

Earlier this year, the School Board completed an equity audit that indicated that many ACPS students and staff felt there was a racial divide in the schools, with non-white students being less likely to be in talented and gifted classes (TAG). The data presented to the School Board at the workshop verified that perception, showing that black students and Hispanic students accounted for only 15% and 13% of TAG programs respectively.

Members of the School Board said as the group moves forward with its worth, it will have to determine whether policies focused around equity will focus more on the racial divide in the school system or the economic one.

“As a Board, we can say what we really have is an issue with our Hispanic or African-American students, or we can say actually this is an economic issue, and that will require different courses of action,” said School Board Member Heather Thornton. “Data is a flashlight but it doesn’t give us answers. It’s our job as a board to make those high-level decisions.”