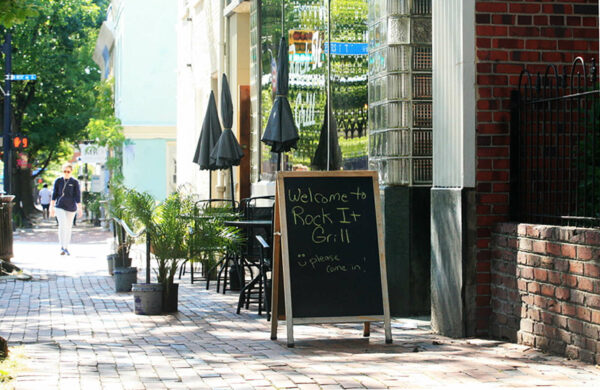 With the lifting of COVID-19 restrictions, dancing is returning to Rock It Grill in Old Town, but the pool tables likely won’t be coming back anytime soon.

Remnants of the pandemic are still visible at the hangout at 1319 King Street. Staff continue to wear face masks and a plexiglass screen separates the deejay from the audience for karaoke, which was brought back late last summer and is now held every Thursday, Friday and Saturday nights.

“I’m energized,” Rock It Grill owner Laura Seiss told ALXnow. “The pandemic taught me to pay attention to the basics. It’s easy to try to cater to everyone, but you’ve got to stick with your business plan and what works, and then concentrate on doing that the best that you can. Our customers want good, friendly service.”

More good news — Rock It Grill’s annual Halloween party, which is usually a smash hit and was canceled last year, is back on. Seiss also wants to bring back karaoke to seven days a week, provided that she can hire enough servers and deejays. Seiss said that her skeleton crew of longtime staff can hire on the spot, and that anyone interested should show up in person.

Two pool tables were also moved out of a rear section of the restaurant for sanitary reasons last year, and won’t likely be back. Pool players will have to go across the street to play at O’Shaughnessy’s Pub at 1324 King Street.

“We’ve lost a lot of our pool players over the last several years, so we’re going to use that space for a party area,” manager Hana Harris told ALXnow. “We found that the space is much better for parties with 30-40 people, so it has yet to be determined what will happen to the pool tables in the future.”

The 32-year-old restaurant and bar began as the the country western-themed hangout GW’s until 1997, when it rebranded itself as Rock It Grill. It was the only place in town that offered karaoke seven days a week in the city for years.

Seiss got help from her landlord, who forgave much of her rent during the last 15 months.

“My landlord is great,” she said. “The Rock It is not going anywhere.”