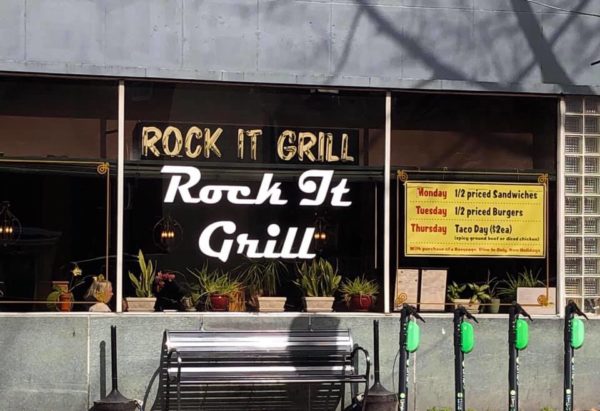 The pool tables are gone, there’s no dancing and everything is spread out, but singing karaoke at the Rock It Grill is still going strong with some new additional safety features.

“Our regular Rock It customers are beyond wonderful,” said owner Laura Seiss. “As far as employees that are back, everybody who wanted to work is working.”

The 31-year-old restaurant and bar at 1319 King Street spent its formative years as the country western-themed hangout GW’s until 1997, when it rebranded itself as Rock It Grill in 1997. It was the only place in town that offered karaoke seven nights a week for years. It was also a popular spot for Halloween and other parties.

The changes don’t mean a thing to Roger Vasilas, the owner of The Lamplighter, which is just up the street. Nearly every day at lunchtime you’ll find him at Rock It, spending his free time eating familiar food and seeing familiar faces.

“I’ve got too many good memories of this place to pick one that stands out,” Vasilas said. “I know everybody here. I can have a conversation about anything with anybody here.”

Manager Hana Harris has worked for Seiss the last 11 years, and was temporarily laid off for two months before Rock It reopened at the end of May.

“This place is like ‘Cheers’ because everybody knows your name here,” Harris said. “Business is starting to slowly pick up bit by bit.”

Now there’s karaoke Wednesday through Saturday. The deejay stands behind a plexiglass screen and receives songs from staffers who give them written requests from customers.

“The best is that everybody cheers for everybody with the karaoke,” Seiss said. “It’s heartwarming. The thing about us is that somebody can walk in the first time, and when they come back the regulars welcome them back.”

Seiss has been unable to pay rent throughout the pandemic and has paid her landlord 25% of the government loan monies she has received, she said. The business has gone through the ALX Promise accreditation through the Alexandria Health Department, and she says her staff of nine full and part time employees are working hard to keep things clean and safe.

“We don’t want to go backwards, and we’re working really hard,” Seiss said. “We’re not a takeout kind of place, and people like to come here to hang out.”

Image via Rock It Grill/Facebook