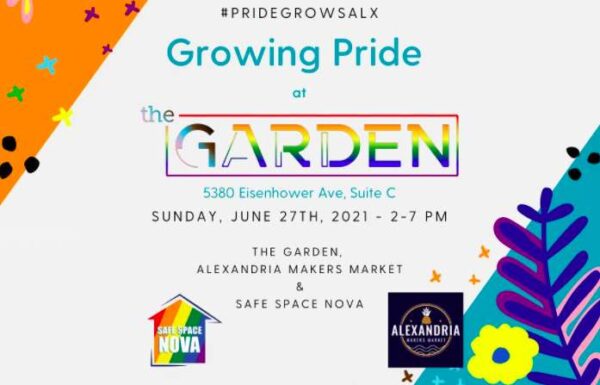 For nearly two years she’s managed up to 80 Alexandria makers, selling everything from soap and candles to dog food and popcorn seasoning, and on June 27 will feature 15 makers and their products for her first in-person event since the start of the pandemic last year.

“I think the fog really has lifted ,” Kovach told ALXnow. “With this vaccine rolling out, I think everybody’s tentatively, cautiously returning back to normal.”

June is Lesbian, Gay, Bisexual, Transgender and Queer (LGBTQ) Pride Month, and there are a number of planned events throughout the city.

Kovach is finalizing bands that will play at the Growing Pride at The Garden event, which will be held at Building Momentum at 5380 Eisenhower Avenue. The event feature local LGBTQ+ makers and food trucks from Hog-It-Up BBQ, Professional Competition BBQ Team and Anita’s Frozen Cotton Candy. A portion of the proceeds from will also go to Safe Space NOVA.

Kovach, who owns A|VA Apparel, founded the Makers Market in 2019, and has worked with more than 80 makers. She interviews them, too, in an online interview series Make It Alexandria on ZTV. On June 27, she will interview Amy Eggers, who has been called the “Martha Stewart of Del Ray”.

“For some makers it’s a side hustle, but for most this is how they make their money, put food on their table and keep a roof over their heads,” Kovach said. “That’s a very serious situation.”

Kovach continued, “I think a lot of people have taken this time to take more risks, and to explore areas to expand their product lines and keep things fresh. Simply because now is the time. If you’re not going to sit down and kind of challenges. it’s probably not going to happen. I think that has been good for these makers from a mental standpoint, and they’ve been able to challenge themselves and continue to grow, despite what’s happening to the world in the background.”

Kovach said that she wants to hold more public events in the future, like a holiday market in November.

“I think, in terms of me hosting a marketplace online, I’m not sure that that’s the right direction,” she said. “If we can return to in-person and really focus on that, that would be amazing. I think that would just be fun to do throughout the year, and really kind of make each event special.”

“Yeah, it was crazy in the best way possible,” she said. “I thought, okay, I’ve found the lightning in the bottle. This is what we’re going to do. And then COVID hit and everything was put on pause. Now can hopefully get back to the way things were.”

The following makers will be featured at the June 27 event: