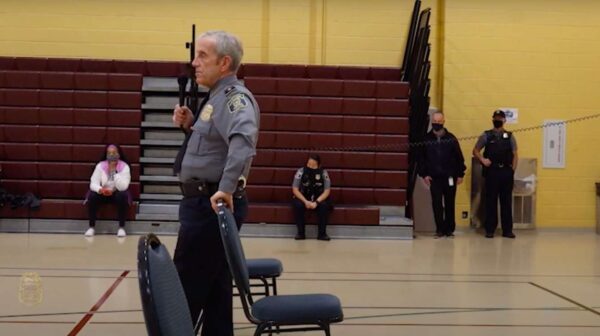 At a community meeting earlier this week, police grappled with public concerns over last year’s spike in crime and addressed some of the causes behind it.

The elephant in the room was the shots fired call on April 6 that ended with a chase into D.C. and one of the suspects died after jumping off an overpass. On that topic, some seemed hopeful that Brown could shed more light on what happened.

“I will tell you right now, that investigation and several investigations are ongoing,” Brown said at Charles Houston Recreation Center in Old Town North on Monday. “Investigation of the incident is an ongoing thing and there are things we won’t talk about.”

Brown said some public discussion of what happened is limited by an ongoing death investigation in D.C., and six APD officers remain on administrative duties pending the outcome of an internal investigation.

Brown also worked to waylay some concerns by noting that last year’s spike in crime hasn’t carried over quite as much into 2021.

“Our shots fired cases thus far this year are where they are the year before last, which is a much lower number,” Brown said. “But that doesn’t make it any easier for those of you who have a bullet hole in your window.”

Brown said one of the biggest spikes last year was in larcenies, which started picking up in the summer. He also said there was an increase in thefts for supplies that were scarce early in the pandemic, like detergent products.

“We had two major companies that changed their posture on petit larceny,” Brown said. “So, we were getting called for a lot of those.”

One of the main concerns from nearby residents was a decline in local patrol officers over the last several months and repeated 911 calls that never resulted in a police investigation.

“We did reduce some of the calls we responded to and that was department-wide,” Andreas said. “Some of the calls you called in may have fallen into that criteria, and you may not have seen an officer. But that has been lifted as of a month ago.”

Brown said crimes against property were generally down, except for cars being broken into and a surge of calls about election posters put up on roads and private property over the summer, when the national election was heating up and protests were ongoing.

But Part 1 crimes — crimes against people, like murder and assault — increased 19% last year.

“I can’t explain the numbers,” Brown said. “I’ve been looking at those kinds of numbers for years and I haven’t seen those. Part of me thinks it’s the pandemic, some of it’s the national discussion of policing. Those numbers are what they are.”