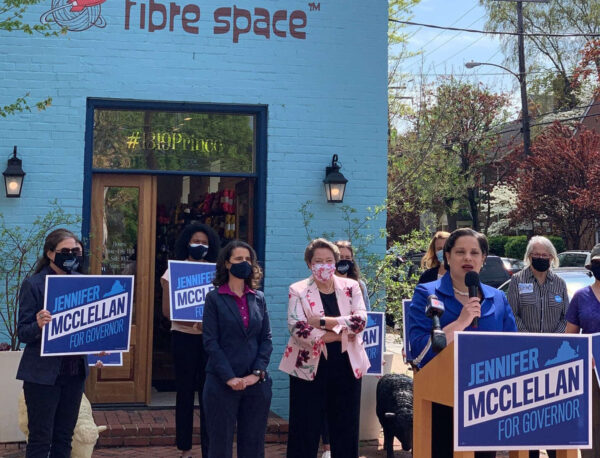 Democratic gubernatorial candidate Sen. Jennifer McClellan (D-31) was in Old Town Thursday to introduce “Women For McClellan”, an initiative to send more than 75 her female supporters around the state in the run up to the June 8 Democratic primary.

McLellan held the event outside fibre space in Old Town, although shop owner Danielle Romanetti could not participate. It was her second event outside the shop, which has gained attention since being visited by Vice President Kamala Harris and being featured on GMA3 and Lifetime.

Romanetti said that McClellan is a hard-working legislator.

“Sen. McClellan has 15 years of experience as a legislator in Virginia and has shown that she is both thoughtful and hard working,” Romanetti told ALXnow after the event. “It is time that our state elects a woman to our highest office, and I’m proud to support her candidacy.”

While McClellan did not delve into specific policy positions, she was publicly endorsed Thursday by former Congresswoman Leslie Byrne and State Sen. Jennifer Boysko (D-33).

“There’s a saying in both politics and business,” Byrne said. “Just don’t tell me what you’re going to do. Show me what you’ve done… She has done so much over her life. She does for the Commonwealth what I hope every citizen would do. She works to make it better.”

McClellan currently trails in third place behind former Governor Terry McAuliffe and Sen. Jennifer Carrol Foy in fundraising. She’s the vice chair of the Virginia Legislative Black Caucus, and spent 11 years in the House of Delegates before being elected in a special election to the Senate in 2017.

She also said that her new group of supporters will help “shatter the glass ceiling” that has kept women out of the governor’s mansion.

“When my grandparents and parents fought for the right to vote, for the right to be treated like other citizens, they taught me through their life experience growing up in the Depression as they did under the tyranny of Jim Crow, that at its best government is a force that helps some people, that solves their problems and makes the community better. But at its worst, it oppresses some to the benefit of others,” she said.

McClellan continued, “As we face the worst health pandemic in 100 years, the worst economic crisis since the Great Depression, a reckoning with racial injustice, a growing loss in faith that Virginians have in government’s ability to understand and care about their problems, let alone solve them — we need a new perspective in the governor’s mansion. Virginia has the worst record of elected women to office. It’s time to change that. We’re going to change that.”