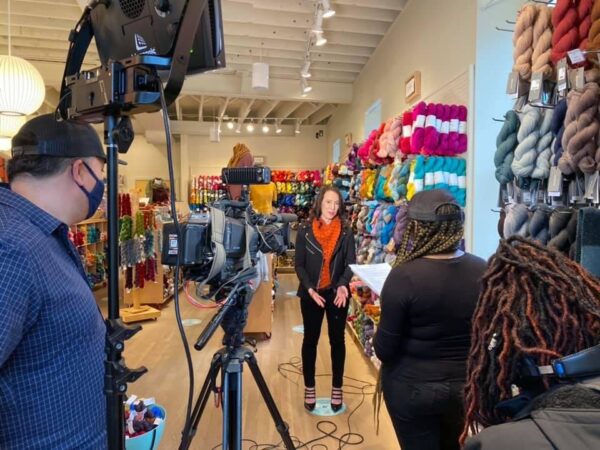 It’s been a whirlwind month for fibre space owner Danielle Romanetti, and she’s had to keep most of it under a tightly knit lid.

This afternoon, Romanetti and some of her customers were featured on GMA3, an offshoot of Good Morning America.

“It’s surreal,” Romanetti said of the experience. “But it’s also incredibly important for business during a time when it usually slows down. I’m incredibly grateful.”

On the show, Romanetti talked about getting government assistance during a time when she would have otherwise been forced to furlough staff.

“I’m really proud of the fact that we didn’t have to cut any staff members and we didn’t take any hours from staff members that didn’t want them taken away,” she said. “We actually hired another employee in the summer.”

On March 3, Vice President Kamala Harris took her first official visit out of the White House and met with Romanetti at her Old Town shop. While Harris pushed the passage of the $1.9 trillion COVID relief bill, Romanetti talked about the impact from COVID-19 on her business.

Four days later, Biden signed the bill into law and Harris reached back out to Romanetti on Zoom.

“She does follow-up calls and follows through,” Romanetti said. “The call was actually delayed because she was still with the president signing the bill.”

Tomorrow, Romanetti will appear in on a “Women Making History” special on Lifetime with Vice President Harris and Oscar nominee Andra Day. The show, which will delve into the women who have influenced Harris, will also showcase “some extraordinary women who are helping to shape our future.”