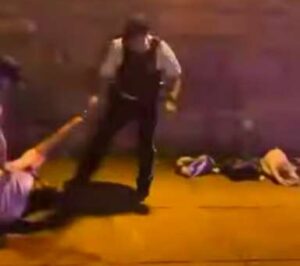 A video has surfaced of 35-year-old chase suspect Anthony Louis of northeast D.C. after he jumped off an over pass while allegedly eluding police.

In the video, an observer is heard telling officers to be careful with Louis, who died after falling and getting tased by an arresting officer.

Louis is seen twitching on the ground, and then an officer pulls on his limp arm and drags him a short distance.

Louis later died on the way to the hospital.

Louis’ family are seeking answers, according to NBC4.

Three other suspects were arrested in the incident, which began after shots were fired in the 800 block of North Patrick Street at around 8:40 p.m. last Tuesday night.

Police chased the alleged suspects, and Louis, who was reportedly driving the getaway car crashed on Interstate 295 before jumping.

A GoFundMe campaign has been started to raise money for Louis’ family. It has raised about $1,200.

The Metropolitan Police Department is conducting the death investigation.