In what is possibly the ultimate example of making use of the city’s land scarcity, a new application coming up at the Monday (April 12) Board of Zoning Appeals meeting seeks to turn a Parker-Gray alleyway into a new single-family home.

The 2,000 square foot lot at 1117 Queen Street is strip of gravel between two other homes mainly used for street parking.

It isn’t the first time the property has been a home, however. According to the staff report, records show a home existing on the property in 1877, though the original date of construction is unknown. The home was demolished in 1985. 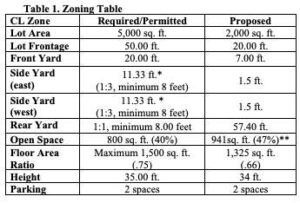 “The request is a reasonable deviation from the provisions of the CL zone of the Zoning Ordinance,” staff said. “The minimum lot area and lot width, front setback and side yard setback requirements do not reflect the existing historic development character of this neighborhood, nor do they reflect the building that was historically on this property for more than a century. The minimum lot area and lot width, and side yard setbacks result in this lot being unbuildable without variances.”

The staff report noted that no other residential lots on the block meet the minimum lot area either, with some of the lots being less than 1,9000 total square feet.