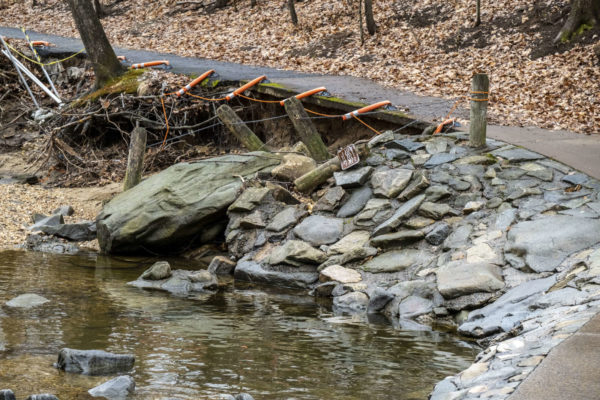 The Duke Streeet transitway, the Potomac Yard Metro station, and several other city projects have made some substantial headway recently with some big new developments scheduled for the next few months.

A quarterly report headed to the City Council tonight details the latest on several of the city’s major infrastructure projects.

One of the projects recently completed was the construction of Fire Station 203. The report noted that earlier this year, the fire department moved out of the temporary station and into the new one in the Cameron Mills neighborhood.

The project is estimated to be fully completed in the first quarter of fiscal year 2022.

At the Potomac Yard Metro station, the report said that work is currently ongoing for the pedestrian bridge, and the next steps are beginning work on the south pavilion that will provide additional pedestrian access to the station. Pile driving at the project also began in March.

The report also noted progress on a plan to build a new Bus Rapid Transit system on Duke Street between the King Street Metro station and Landmark Mall — which could become more of a destination with new redevelopment plans.

This project will include planning/environmental design and construction of a Bus Rapid Transitway along Duke Street between the King Street Metro Station and Landmark Mall. The project is anticipated to be implemented in phases, which will be determined through the Civic Engagement and conceptual design phases of the project.

The project had a kickoff meeting last month, and is scheduled to be completed at the end of FY 2028 with an estimated cost of $116 million.

On the smaller side, the report noted that the overhaul of Armistead L. Boothe Park (520 Cameron Station Boulevard) is in the midst of its design process and is currently in the middle of public outreach. According to the city, the project will convert the natural turf baseball diamond into a synthetic turf field with more baseball and other sporting amenities:

The Field Replacement project will convert the existing natural turf field from a natural grass diamond field with a natural grass overlay rectangular field to a full synthetic turf diamond field with synthetic turf overlay rectangular field. In addition, the project will include upgrades to the field lighting, dugouts, warm up areas, batting cages, spectator seating, scoreboard, and scorers’ table. The project will be ADA compliant and it will address environmental site constraints.

Construction is scheduled to start later this year.

While much of the community discussion about stream restoration has been focused around Taylor Run, the city is also ramping up efforts to start undergoing similar restoration work at Strawberry Run.

Urban stream restoration project to address the state and federal mandates of the Chesapeake Bay Total Maximum Daily Load (TMDL) to clean up the Bay as enforced through the City’s Municipal Separate Storm Sewer System (MS4) General Permit. The project also stabilizes a degraded (and continually degrading) urban stream corridor along with critical sewer infrastructure within the stream corridor and stream bed.

Through March, the report noted that staff were continuing to:

Develop comment responses and organize additional public engagement meetings and on-site meetings with homeowners and community representatives. Consultant to perform downstream site inspection and assessment. Continue to engage with homeowners for right of entry agreements. Public engagement period anticipated to be extended beyond the meeting with City Council on 4/27.

The Strawberry Run restoration is scheduled for completion in FY 2023 with a total cost of $2.53 million, a notable increase over the $1.60 million listed in 2020. The report said the increased costs were the result of the expanding scope of the project.

“Total Estimated project budget is $2.53M; however, $0.80M is anticipated to be reimbursed with Stormwater Local Assistance Fund (SLAF) funding from Virginia Department of Environmental Quality (DEQ) per a grant award,” the report said. “The estimated project cost increased due to additional critical areas identified during design which resulted in scope expansion. Additionally, higher CMI costs are anticipated per cost data from recent projects with similar scope.”

The report also noted that improvements to Windmill Hill Park are also running a bit over budget, increasing from $5.5 million in last year’s estimates to $6.6 million this year.

“Phase II project cost estimated to be $730,000 for professional services. Cost estimate may change based on cost escalation associated with any delay due to funding timeline.”

Estimated completion was also pushed back to later in FY 2025.

Holmes Run has been left in a state of disrepair following intense flooding two years ago, but the city is currently in the process of repairs that will reopen portions of the trail to pedestrian access and add measures to help prevent future flooding.

Design proposals for the project were due last week and the city is currently working through the necessary budget documents for a pedestrian bridge along the trail.

The repairs are estimated to cost a total of $6 million to be completed in FY 2024.