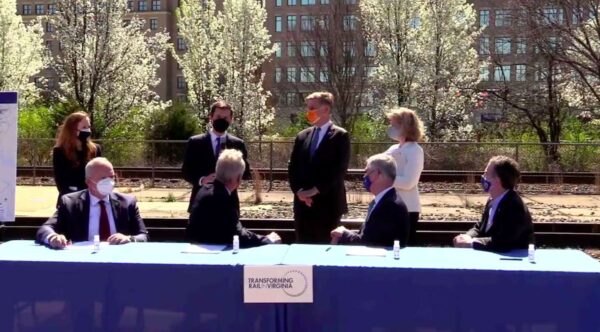 The investment and agreement is designed to pave the way towards increased VRE and Amtrak service, greater connectivity to other parts of Virginia, and to lay the groundwork for a high speed rail corridor — something that’s been a talking point for Buttigieg over the last few months.

“Every day at stations like this across America, transportation workers are serving on the frontlines of America’s response to this pandemic,” Buttigieg said. “They have been delivering vaccines, getting people to essential jobs, and getting goods to wherever they need to go. Their service has been extraordinary, but the challenges facing them and our entire transportation system have been daunting… We are proud to say, on behalf of this administration, help is here.”

“We know the cuts these agencies were facing disproportionately harm workers,” Buttigieg said. “It’s a matter of equity; doing right by so many heroes of the pandemic.”

Northam said the rail investment is part of a gradual push to get more people out from behind the wheel of their cars and into passenger trains.

“America is still a nation of drivers,” Northam said. “We tend to like our cars. but all those cars on the road come at a price.”

Northam said that the state, Northern Virginia in particular, is plagued with congestion to levels where adding more capacity to the highways is no longer a viable option.

“Adding more highway lanes isn’t the answer,” Northam said. “A study of I-95 found adding a new lane in each direction would cost 12.5 billion dollars — and by the time it was done, corridor would be just as congested as when we started. Rail can add additional capacity at a third of the cost.”

Tune in at 11:00 AM for an important rail announcement—I'll be joined by @SecretaryPete and leaders from @Amtrak, @CSX, and @VaRailXpress: https://t.co/xl5umgOC0T

I'm grateful to members of Virginia's congressional delegation from both parties who championed legislation that will allow for the construction of a new Long Bridge and support the long-term investments we need to fund these important projects. pic.twitter.com/FwlKDxJTpI