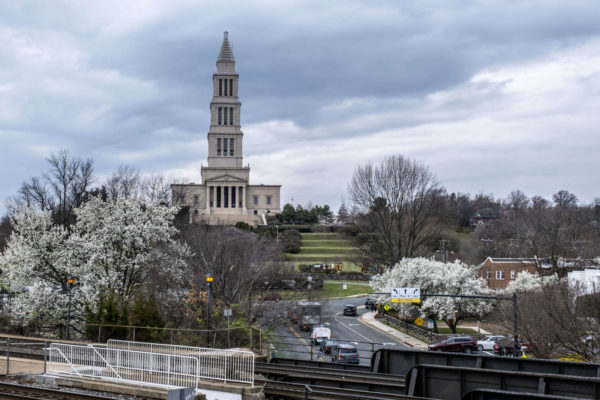 One of the most visible congestion points in the city is about to get revamped.

On Tuesday, the Alexandria City Council unanimously approved roadway improvements the the intersection of King Street, Russell Road and Callahan Drive, as well as a conversion to one-way for the service road leading up to the George Washington National Masonic Memorial.

“I think it’ll be safer for one and all,” Alexandria City Councilwoman Del Pepper said.

Roadway improvements in the area include:

Improvements at the intersection have been in the works since 2015, when the city received a $1.2 million Federal Transit Administration grant. The next few years were spent collecting and analyzing data, and were met with delays due to “the combination of staff capacity and implementation of the King Street Metro Improvements Project and the 2019 Metro Summer Shutdown,” according to a city staff report.

Christopher Ziemann, the city’s Transportation Planning Division chief, said that the one-way conversion was a compromise.

Mayor Justin Wilson said that the traffic island in the center of the intersection will not be impacted, as it is designated as a national historic landmark.

“I think this is a step forward and certainly enjoys broad-based community support, which is great,” he said. “I appreciate staff’s efforts to build consensus on the changes on this intersection. I know this has been a long time coming.”