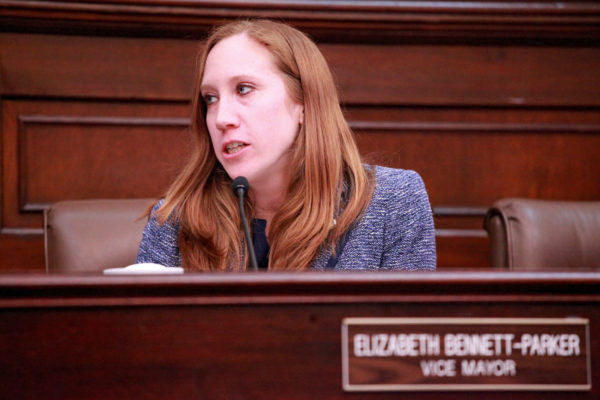 Alexandria Vice Mayor Elizabeth Bennett-Parker says she’s been serving residents of the 45th District for the last three years, and that she didn’t consider politics when moving into the district in December.

Bennett-Parker said that she moved with her 99-year-old grandmother, her husband and cat to the 45th District in December after her grandmother fell two times. The following month, she announced she was running for the seat, which is currently held held by Del. Mark Levine as he runs for Virginia Lieutenant Governor.

“I am running because I think I have a lot to bring to this seat,” Bennett-Parker told ALXnow. “Having the perspective of being a small business creator, co-leading a nonprofit that works with underserved women in our community and serving on City Council, where we don’t always agree but we get things done, it gives me the insight and skills that it takes to be an effective delegate.” 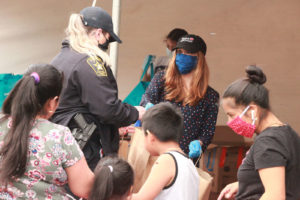 Bennett-Parker would not say anything negative about Levine or his tenure in the House, but said that she would work with him well if he is elected lieutenant governor. Levine is also running for his House of Delegates seat against Bennett-Parker in the June 8 democratic primary.

“I wish him well in his bid for lieutenant governor and and I believe we would continue to work well together with him in that role,” she said.

During the last year, Bennett-Parker volunteered at food distributions with ALIVE! and World Central Kitchen, worked with Volunteer Alexandria and joined the Alexandria Medical Reserve Corps. One of her proudest moments was during spring break last year when a staffing shortage was forcing Alexandria City Public Schools to stop their daily free food distribution.

“Hunger doesn’t stop for spring break,” Bennett-Parker said. “I brought this to the attention of city staff and we worked to find a solution. Through my day job, I have a food manager’s license, and no one else who was available had, so I wound up leading the food prep efforts at the T.C. kitchen that week with an amazing group of RPCA (Recreation Parks and Cultural Activities) and ACPS staff, and as a result we will to continue providing food to students during spring break.”

Bennett-Parker said that she did not consider moving to the District to run for office.

“I moved because my grandmother fell twice within a week in our home, and thankfully she was fine but it was terrifying and our priority is to keep her safe,” she said. ”

A political newcomer going into her election as vice mayor three years ago, she is now running as a Northern Virginian with local elected experience. She is also co-director of the nonprofit Together We Bake.

“One of the reasons I’m running is because of the limitations that have been placed on localities like Alexandria by the state,  leaving us lacking authority to really be able to serve our residents in the best way,” Bennett-Parker said. “That experience is lacking in Richmond, where there are now only 18 members of the House of Delegate who served in local elected office. None of those are from Northern Virginia, and we face different issues here than other parts of the state.”