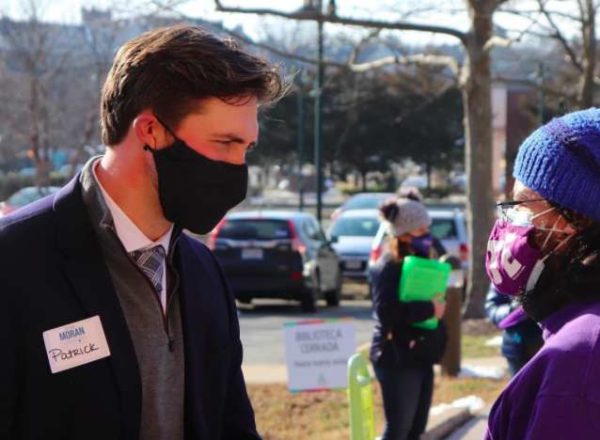 Patrick Moran wants to focus on the issues, and says that events from his past are hurtful, misunderstood and private.

The 31-year-old son of former Northern Virginia Congressman and Alexandria Mayor Jim Moran, announced last month that he is running for City Council. He’s a graduate of Yale University with a degree in political science, and his campaign is tarnished by events that occurred shortly after he graduated in 2012.

He pleaded guilty to simple assault after a fight with his then-girlfriend, and later resigned as field director from his father’s Congressional reelection campaign after talking about the possibility of voter fraud with an undercover videographer conservative activist James O’Keefe. Moran said that the incident was uncharacteristic of the relationship and that it was otherwise “very loving”.

Moran’s father was first elected to City Council in 1979, became Alexandria’s Mayor in 1985 and was elected to Congress for Virginia’s 8th District in 1990. He retired from politics in 2014.

“This was targeted and unfortunate, and at the time I was doing an enormous amount of work,” Moran said. “Poor judgment was exercised in not showing this guy that door as soon as he started to go off the rails.”

Two years later, in 2014, Moran, joined the Alexandria Citizen Corps Council. He became the chair in 2018, and in February presented City Council with the Resilient ALX Charter. The charter, which will take two years to complete, will evaluate the city’s existing preparedness data across departments. It’s this document that he mentions when discussing his achievements in the community.

“It’s significant,” Moran said. “It’s talking about a holistic strategy in which we’ve engaged with our stakeholders across the city.”

Moran said he is not a voice of opposition to the current City Council. He said he’s learning about issues that affect the community, and spent last Sunday speaking to voters at Pat Miller Neighborhood Square in Del Ray. He recently wrote that the city needs to hire additional maintenance workers to pick up trash on the waterfront.

As far as transportation issues, such as the Seminary Road diet, Moran said that the city needs to ensure that it isn’t contributing to traffic buildups in neighborhoods.

Moran is married, has a child, and is the founder of an environmental policy consulting company and a landscape design firm, Tactical Land Care.

When asked about his family legacy, Moran said that he works with a football mentality. Moran was named Yale University’s defensive lineman of the year in 2011, and is a third generation football player. His grandfather also played for the Boston Redskins and his father played at Holy Cross.

“I am extremely proud of is my father’s record of service,” Moran said. “There’s a determination that goes along with it. You can’t win a game or have any semblance of success without working together. There’s a lot of values that come with that and a lot of lessons that are important in developing a sense of humility.”

Our campaign’s one question: what in Alexandria is most important to you? Thank you neighbors for taking the time at this mornings farmers’ market to share your thoughts/concerns/points of pride! Our future is bright! #BestSmallCity @DelRayFarmMkt #moranforalexandria #DrainALX pic.twitter.com/maUg79FXgF

The Alexandria Health Department is advising residents to take COVID-19 tests before and after traveling this Thanksgiving holiday weekend. “Everyone has a role in keeping COVID-19 out of holiday gatherings,”…

Included in this week’s Just Listed is a 5 BD/4 BA brick colonial home with a finished lower level, patio and fenced rear yard.

(Updated 1:30 p.m.) Police say a barricade situation that’s been ongoing for roughly 24 hours has been peacefully resolved. It started with a road-rage incident around noon yesterday (Tuesday) that…