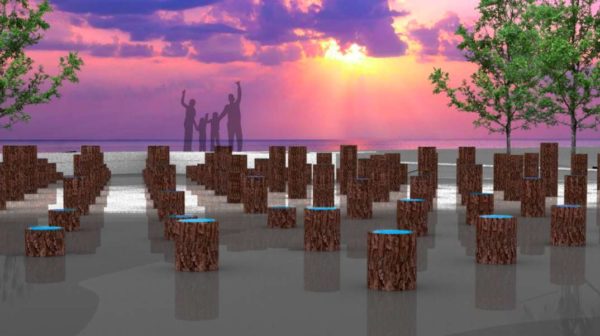 “Starting in the 18th century, thousands of wood pilings were driven deeper into the Potomac River over time, thereby shifting the city’s waterfront over decades. This allowed Alexandria to develop and grow its sprawling dock into a major commercial port,” according to the city. “Each 14-inch diameter piling will be topped with a cobalt blue mirrored surface etched with growth rings that suggest the passing of time. 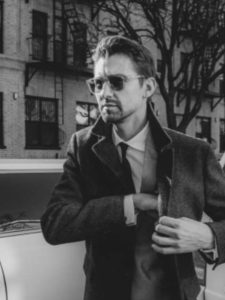 “These mirrored surfaces will shimmer in the light like water and reflect the sky and faces of passersby. Visitors to the site will be immersed in this shimmering landscape as they navigate through the pilings considering their place in the city’s history at this moment in time.”

Groundswell will be on display until November.

Riegelman, who works and lives in Brooklyn, is not ashamed of singing his own praises. He was named one of the “Coolest Dads of 2019” list by Fatherly magazine, and has been featured in the The New York Times, New York magazine and Vogue. Other installations have been featured at the Shanghai Museum of Glass, Britain Museum of American Art and Museum of Modern Art.

“Quite simply, Mark Reigelman is a genius,” the artist says on his website. “He bears his burden with the grace and sophistication not often seen in someone so young, so talented and so very handsome. His genius is exceeded only by his modesty and benevolence. Those who know Mark are blessed, and those who do not can only hope for such good fortune.”