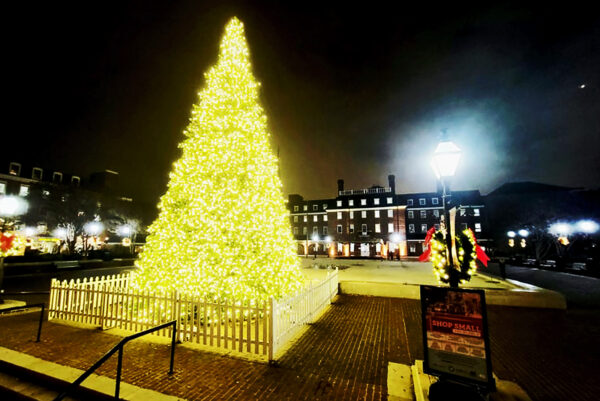 Council voted unanimously and without discussion on the permanent conversion of the unit block of King Street and the northern portion of Strand Street.

A survey of community feedback on the closure found that 91% (of 1,853 survey respondents) rated the pedestrian zone as very positive, and that 89% of wanted it to be permanent.

The Waterfront Commission also approved the plan, and suggested to City Council the following “enhancements”:

Conversion costs will be minimal, said City Manager Jim Parajon in a note to Council.

“If the closure is approved, there will be minimal costs associated with updating parking signage and refreshing striping,” Parajon wrote. “All of these costs can be handled with existing budgets. Also, since there will be four metered spaces eliminated along the Waterfront Park to provide turnaround space and parking for police, this will total approximately $8,000 per year, or $666/month.” 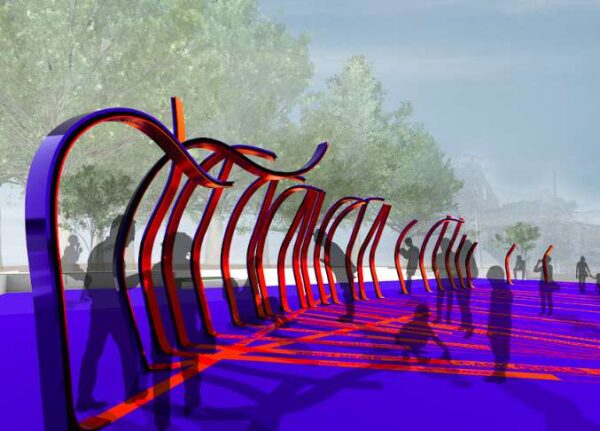 The kitschy I Love You sign in Waterfront Park is no more, replaced with a holiday tree, but the big news this week is the announcement of a new art project that will replace the tree early next year.

A new project by New York City-based artist Nina Cooke John called “Two Boxes of Oranges and Admonia Jackson” will be installed in March 2023 and will remain in place until November.

The project features steel beams meant to evoke the series of 18th-century ships discovered in Old Town excavations between 2015-2018.

Along with the beams there will be pained images of herring, coconuts, gin, a woman named “Jane Tailor” featured in a ship manifest, and other notable parts of the city’s nautical history.

(Updated at 10:35 p.m. on 11/22/22) The fifth art installation at Waterfront Park will commemorate the wrecked 18th century ships discovered at the sites of the Hotel Indigo and Robinson Terminal South.

“Two Boxes of Oranges and Admonia Jackson” will be erected in mid-to-late March 2023 and be up until November. The work, by New York City-based architect and artist Nina Cooke John, reveals a steel abstract of a ship’s hull, meant to illustrate the city’s historical depths.

The installation was chosen by a task force of Alexandria Arts Commission members, including Claire Mouledoux, senior vice president of marketing for Visit Alexandria; Clint Mansell, director of the Principle Gallery (208 King Street); and Nicole McGrew, the owner of Threadleaf & Company.

According to the City:

Like an archaeological dig, the site is layered, with portions of different information coming through.  The sea of blue on the plaza is painted on the outer surface of the pieces.  The orange of the inner surface extends to its shadows on the ground.  Herring, coconuts and gin are painted on the ground alongside Jane Tailor, female, 5′-2″ in text pulled from ships manifests.  Also listed are two boxes of oranges and Admonia Jackson. The text is also embedded in the underside of the steel.

Goodbye, “I Love You”

In the meantime, the “I Love You” installation was taken down on Sunday — after a farewell party hosted by the Department. The neon “I Love You” sign by Roberto Behar and Rosario Marquardt of R&R STUDIOS opened in March, and was a favorite for selfie-takers.

A holiday tree will be put in its place, and lit up on Nov. 19. That’s in addition to the big holiday tree lighting just a few blocks away at Market Square in front of City Hall on that same date.

“I Love You” had issues with light bulb outages over the summer, and the bulbs — individually hand-crafted glass tubes containing neon gas — were reinforced by a repair crew. But in its final weeks, the bulb in the “O” in the sign’s “You” was blown out after someone tried to throw a football through it.

“So, we finally figured out a way to keep those tubes from snapping, and then somebody tried to throw a football through the ‘O’ in the ‘YOU’,” said Diane Ruggiero, the deputy director of the city’s Department of Arts, Recreation, Parks & Cultural Activities. “If this artwork weren’t temporary then it would be designed a little differently, and that’s what it is — temporary.”

The ‘I Love You’ art installation at Waterfront Park is having a rough summer. For most of June and July, the “o” in “Love” was out of commission, and all the lights were recently shut off due to flooding.

Not to worry. The opportunity to take awesome selfies with your squeeze has returned.

As of Friday (July 22), all the light bulbs were replaced and are now in working order.

The installation by Roberto Behar and Rosario Marquardt of R&R STUDIOS opened in March and will be on view until November. It’s the fourth in the Site See: New Views in Old Town annual public art series, and maintenance of the installation is the responsibility of the artists. 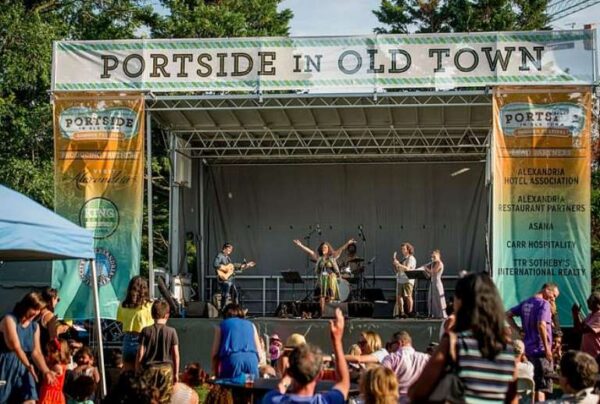 Music, local food and beer is on tap this weekend for the Portside in Old Town Summer Festival at Waterfront Park.

This year, the event is merging with the 44th Annual Alexandria Jazz Fest, and the free events will be held on Friday (June 17) from 6 to 9 p.m. and Saturday from 1 to 9 p.m.

The Portside Festival is organized by Visit Alexandria and the City’s Office of the Arts.

“New this year, the event merges with the  on Friday evening to showcase jazz performances and readings by Alexandria poets,” Visit Alexandria said on its website. “Saturday the festival continues with an eclectic musical lineup, local food, hands-on art and history activities and more.”

There will be poetry read between sets by:

Mayor Asks Metro for Support During Closure — “Alexandria Mayor Justin Wilson urged Metro in a Thursday letter to commit to city rail and bus service amid an announcement of extended closures, particularly on the transit agency’s Yellow Line.” [WTOP]

A new art project coming to Waterfront Park later this month is bringing a splash of pink to Old Town.

The project by Miami artists Roberto Behar and Rosario Marquardt was proposed last year and the city announced it will be officially unveiled on Friday, March 25.

The design is a bold choice for the more aesthetically conservative Old Town known more for red brick than kitsch. A painted pink and white carpet will take up much of the park space while “I Love You” shines from a sign in neon pink letters.

The new display is the fourth public art feature in Waterfront Park since the Mirror Mirror exhibit opened in 2019. The “I Love You” display is scheduled to remain in the park until Nov. 6. 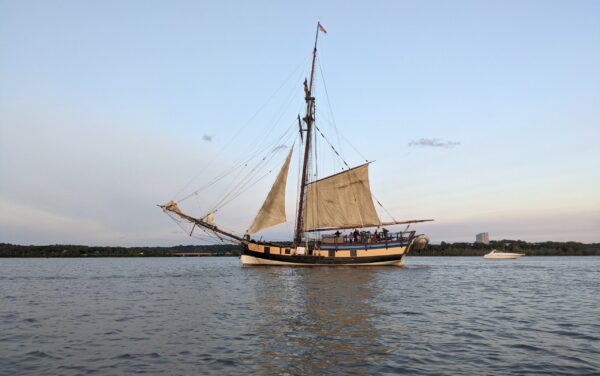 After sailing through perilous economic waters, the Tall Ship Providence just shored up weekly tours until next spring.

The nonprofit is still tabulating the numbers, but expects that since launching in June 2020, thousands of visitors have been welcomed aboard the Tall Ship for tours and cruises. The Providence is a replica of the first naval warship commissioned by the Continental Congress in 1775, and visitors are welcomed aboard by an actor portraying Captain John Paul Jones. 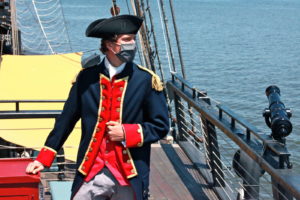 “We were delighted to be able to have as many guests and customers aboard the ship as possible this summer and fall,” Claire Sassin, president and CEO of the Tall Ship Providence Foundation, told ALXnow. “It was a great joy, but there was also sadness because we just want to keep sailing.”

In August, the ship passed inspection with the U.S. Coast Guard and can now coast without a motor along the Potomac River with its sails unfurled. While still open for weekend and private cruises through next spring, the ship recently closed during the week.

“Being able to put the sails up is a completely different experience, and you do get to see what sailing was like back during the American Revolution,” Sassin said.

The pandemic forced the Foundation to alter its business plan to focus on small events, like private tours, wine tastings and beer cruises.

“We had not thought really about doing private tours until the pandemic came about,” Sassin said. “We’ve also added a whole layer of sanitizing in between every single tour, both at our Visitor Center and on the ship.”

In the days ahead, Sassin hopes to see the Tall Ship move to Waterfront Park by 2023, as massive plans are in the works to construct a barge, a new pier and cottages to house the ship and the Senator John Warner Maritime Heritage Center.

Future travelers in the cold months ahead can rest assured, as the ship has heating in the lower deck. In the short term, on December 11, 12, 18 and 19, Captain Jones will tell visitors the Christmas tale of the Schooner Rouse Simmons, which made perilous runs to deliver late-season Christmas trees, until it sank in a storm. 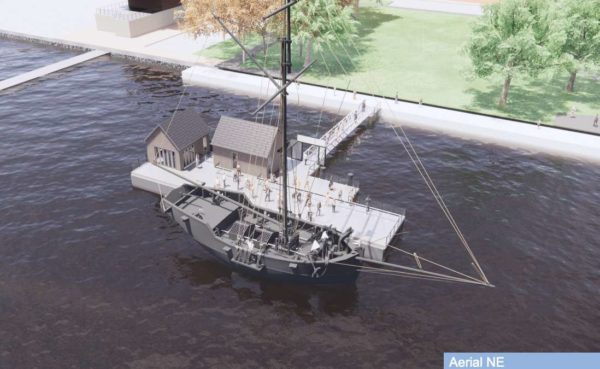 The city has unveiled plans for the next art installation in Waterfront Park, which will be in place at the park for most of next year.

At a meeting of the Park & Recreation Commission Meeting, Diane Ruggiero, deputy director of recreation, parks and cultural activities and two-time ALXnow quotee this week, outlined the initial plans to work with R&R Studio in Miami on a new display meant to evoke joy and happiness after a dour couple of years.

The studio is run by husband-wife artist team Roberto Behar and Rosario Marquardt, who Rosario said have done previous installation art displays including a couple of pieces at Coachella.

The proposal for Waterfront Park is a 15-foot sign with metal letters, outlined in neon, that says “I Love You”. The park will also feature an open area of asphalt painted to look like a room’s carpet.

“There’s a sense of joy,” Ruggiero said. “It’s fun, it’s colorful. There’s an element of kitsch to it.”

Ruggiero said the color of the neon is still being decided as the artists work through figuring out what color shows up best. The current designs show the letters illuminated with what Ruggiero called “Pepto-Bismol pink.”

The idea, according to Ruggiero, is to have another photo-spot that draws people to the waterfront, like the Mirror Mirror exhibit in 2019.

The new park exhibit will run from March 19 — to correspond with the opening of the Cherry Blossom festival — until November 6.