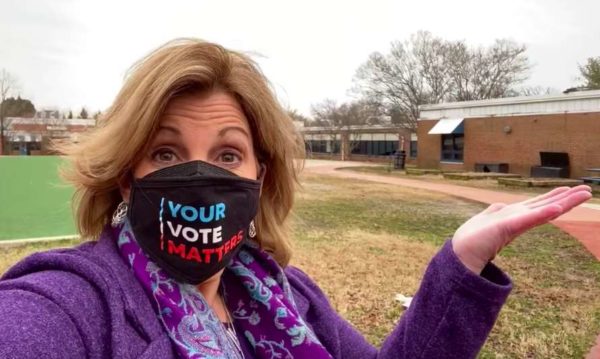 Jackson, who is running for reelection, lambasted the school system earlier this week on Facebook with a one minute video. In the video, Jackson stands outside MacArthur wearing a face mask with the words “Your Vote Matters” printed on it, raises her left hand questioningly and then says: “March 1, 2021. Almost a year and no construction has started at MacArthur. When is it going to happen?”

Jackson wrote that the project is a ticking clock for the community, that Council was told demolition would start last month, and then made impassioned comments at Wednesday night’s joint City Council/School Board meeting on the budget. She said it’s up to the school board and ACPS to field concerns from the community on social media, and that she’s tired of answering their questions on the issue.

While the project is in development, MacArthur students are using the old Patrick Henry Elementary School as swing space.

School Board Chair Meagan Alderton said she did not appreciate Jackson’s comments, and said that she does not engage on social media because it is not the “real world”.

Alderton continued, “Unfortunately, this was a budget session about the combined funds budget, which is focused on social, emotional and academic learning. And we had to deal with this. That’s a problem for me.”

ACPS Superintendent Gregory Hutchings, Jr., said despite delays over easement concerns with Dominion Energy, that construction is on schedule to open the school in Jan. 2023. Fence panels were erected this week at the property, and ACPS staff will have its pre-construction meeting with the city on Friday. Additionally, asbestos abatement at MacArthur starts next week, and clearing the building is a process that can take weeks before demolition can happen.

Hutchings also said that ACPS communicated project updates to the MacArthur community in a Jan. 26 school advisory group meeting, and on Feb. 11 in a school-wide newsletter.

“When we talk about being on time, we’re talking about the delivery of the new school,” Hutchings said. “That is the main concern that we had from the school’s point of view. And that’s been the main concern of the community thus far. With all the work that we’ve done with having our swing space at the old Patrick Henry location, we know we have to be out of that space for students to arrive in January of 2023.”

A member of the advisory committee, however, told ALXnow that it has not met with ACPS since late last year and that the Jan. 26 meeting did not happen. Still, the representative said that the group was aware of the 2023 completion date.

“We’ve been provided many dates throughout this process,” the member told us. “The advisory group requested updates via email multiple times over the last six months and those requests went unanswered for weeks or longer.”

The member continued, “And since the school email update was drafted by a principal, not the central office, it was only distributed to parents who receive school communications. It did not go to those signed up for ACPS updates related to this project or to the advisory group who was simultaneously requesting updates.”

School Board member Ramee Gentry said it was important to keep misinformation from being spread.

“The other issue I have and I think we have to be cautious of is spreading misinformation as (elected officials),” Gentry said. “The information that was shared (by Jackson) was not accurate.”

School Board Vice Chair Veronica Nolan said that Facebook is a tool used by upper middle class residents, and that it fosters inequity.

“One third of our students’ parents do not speak English, and 63% of our parents are from low income backgrounds,” Nolan said. “Should I as an elected be jumping every time an upper middle class person wants to speak? Am I supposed to be a slave to the tool? Instead I want everyone to have access, and that is (through) public hearings, transparent meetings that are recorded such as this one, the website, newsletters (and) the ACPS blast.”

END_OF_DOCUMENT_TOKEN_TO_BE_REPLACED

More Stories
Do You Like the Suggested Names for T.C. Williams and Matthew Maury?City Could Help Turn Hotels Emptied by Coronavirus Into Affordable Housing