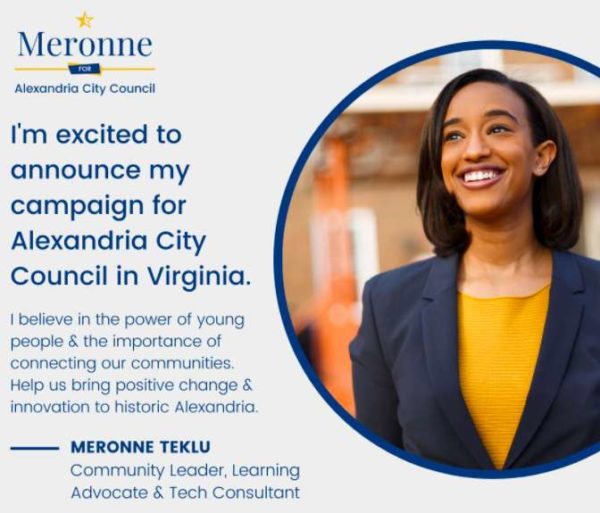 Meronne Teklu, a management consultant at Deloitte, has entered the race for the Alexandria City Council.

“I believe it’s up to each of us to hold our elected officials accountable in enacting long-term change. I’m running to help connect marginalized and underrepresented communities with our Alexandria City leadership,” Teklu announced on Facebook.

The 25-year-old Teklu, who has lived in the West End of the city for a little more than a year, is a 2013 graduate of West Springfield High School in Fairfax County. She graduated from The College of William and Mary in 2017 with a degree in interdisciplinary studies. She gained some notoriety while at school for producing The Real W&M web series looking into diversity at a predominantly white institution.

She has also worked at Deloitte for nearly two years, and filed to run for council last week. She’s a political newcomer, and has not volunteered for any nonprofits in the city or serves on any boards or commissions.

“With the current opportunities with Amazon headquarters relocating to the Arlington County, we have a lot of great momentum to build up our innovation economy in the city of Alexandria, which I’m very excited about and I have a professional background in leading transformational change in government,” Teklu said.

Without delving deeply in to specifics, she lists her top campaign issues as:

Friends, I’m excited to announce that I am running for Alexandria City Council. I believe it’s up to each of us to hold our elected officials accountable in enacting long-term change. Join us! Go to https://t.co/c8Dc5zwkRc #MeronneforCouncil #alexandriava pic.twitter.com/RMWmmI7cng