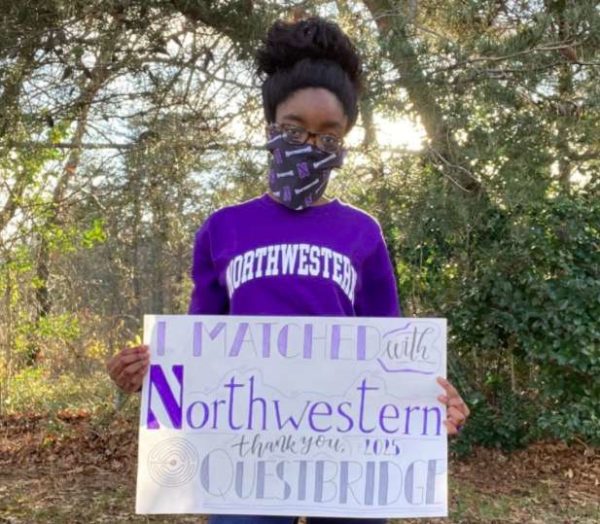 Alexandria’s Bridgette Adu-Wadier has a soft spot in her heart for Black female investigative journalists.

At the top of the 17-year-old’s list of favorites are Gwen Ifill, Yamiche Alcindor and Ida B Wells, and this fall she will get her chance to study journalism at Northwestern University.

“We need young people to be investigating, and to be curious, and to be challenging,” Adu-Wadier told ALXnow.

Adu-Wadier, who is an editor for the T.C. Williams High School newspaper Theogony, was recently named one of 1,464 students (out of 18,500 applicants) around the country to be awarded the QuestBridge National College Match Scholarship. She was also recently honored as one of the country’s up-and-coming storytellers by PBS.

A first generation daughter of Ghanaian immigrants, she’s the eldest of four kids, and, while born in New York, has spent most of her life in Alexandria. She attended John Adams Elementary School and Francis C. Hammond Middle School.

ALXnow: How did you get the scholarship? Did you write a good essay?

Adu-Wadier: I do believe I wrote a really good essay, I spent a lot of time. Just trying to make it reflect me and my personal journey and how I developed my writing and how I blossomed as a writer. I talked a lot about how I started out doing a lot of creative writing and writing short stories and how I kind of wanted to tell stories and write about things that I observed in the world and elevate the voices of my generation.

It’s a four year scholarship, which I’m really excited about. It covers tuition, it covers room and board, transportation, my textbooks and my living expenses. Questbridge is just a really comprehensive scholarship and I’m really grateful to have that, especially given that, in school, I can just focus on my degree.

ALXnow: What inspired you to be a journalist?

Adu-Wadier: It’s really been inspiring to see so many journalists challenge modern institutions throughout (the last) four years… In my view, this is kind of a reiteration of the Watergate era in many ways, especially given a lot of the 2018 impeachment trial proceedings and a lot of the journalism that was coming out about the transparency of the federal government.

I did a lot of work for my school TV media program, and I would interview students on video as well, and it was just really eye opening seeing that my generation notices a lot of things and they take on a lot of what’s going on a lot more than adults understand. The peers I’ve interviewed are just really frustrated that adults don’t get that they’re not too young to understand and have a voice on a lot of issues that are going on, and to be curious and to want to investigate. We need young people to be investigating and to be curious and to be challenging.

ALXnow: What’s it been like doing all of your reporting and schoolwork and applications from home during the pandemic?

Adu-Wadier: I’ve had story deadlines on the same day as my college applications and that was a big mess. There’s been a lot of things that have been interesting that I’ve had to adapt to, and, having a noisy house and trying to do interviews from my closet since it’s the only quiet place.

ALXnow: What kind of stories do you envision yourself telling down the road?

Adu-Wadier: I really like doing stories on education to report on. People don’t really invest that much in public education, and I have that personal experience in public education and the policies and legislation passed, as well as talking to students about their high school and college admissions experiences. A lot of those stories are really under told.

Soon, I’ll be reporting on college administrators and what they’re doing, and I’m really excited to do that. Another thing that I’m really really excited to report on is just civil rights… And just seeing how societal inequities affect different racial demographics, especially regarding the COVID-19 pandemic and how Blacks and Hispanics are disproportionately impacted by exposure to the virus. That’s really fascinating.

ALXnow: Which journalists do you admire?

Adu-Wadier: I really appreciate Gwen Ifill and Yamiche Alcindor for everything that they’re doing, and especially on the ocean how she keeps her head out, especially with everything that she went through with the Trump administration and her trying to just do her job and what happened with her. Also, Gwen Ifil,… She comes from a similar background as me in that she was starting off with local newspapers and she experienced a lot of challenges and racism, and then she went on to host Washington Week and co-anchor PBS NewsHour and work with Judy Woodruff. I really really appreciate those two.

I also really look up to Ida B. Wells in how she really challenged institutions and launched this crusade against lynching and how she very much risked her life in doing so.

Overall, I just have a really soft spot for Black female journalists in general, so those are my top three. I also really really like Carl Bernstein and Bob Woodward and I try to emulate them and how rigorous and relentless they were and their investigative pieces of Watergate. And, you know, I love All The President’s Men. I read the book, and I watched the movie and I just think it’s admirable what they did and just what they took on and the risks that they were taking and challenging directly.