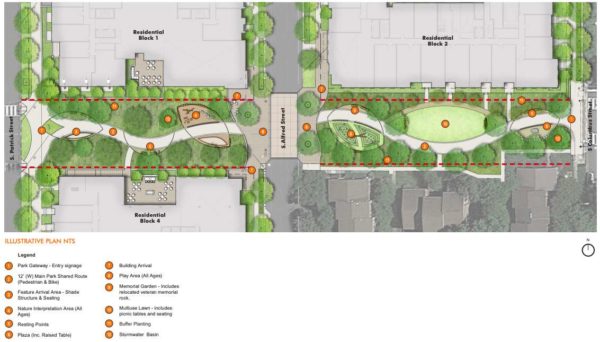 While debate continues over the Heritage development, the city has turned its eyes towards a proposed revitalization of the park running through the heart of the development.

The plan to revitalize Wilkes Street Park envisions turning the area between S. Alfred Street and S. Columbus Street into a park with ply areas, seating and passive areas along with an improve multi-use trail.

A public hearing on the project is scheduled for the Park and Recreation Commission meeting on Thursday, Feb. 18.

The bikeway that goes through the park will remain intact in the new redesign.

“An important bikeway goes through the park,” the city said in its guidelines. “This bikeway must remain and be incorporated as part of the park design and will follow the Complete Streets Design guidelines’ preferred width for two-way Protected Bike Lanes. Additionally, this route is a commuter route for pedestrians and this use of the park must also remain. The two uses must co-exist in the safest design possible.”

The redesign of the park is included as part of the redevelopment of the Heritage, which is headed to the City Council for review on Feb. 20. The project attracted some criticism from city leadership over the project’s aesthetics and scale — and from the public over concerns that the development adds considerable density to southern Old Town.