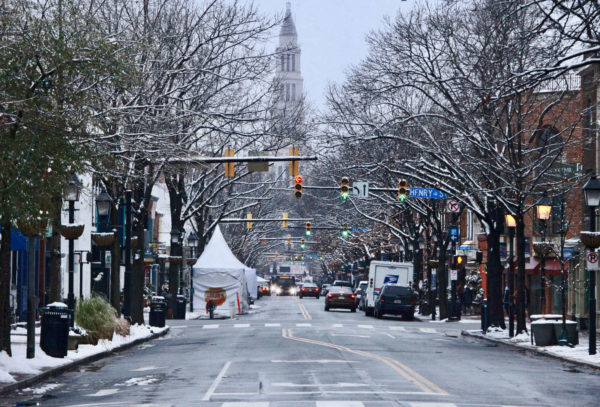 Several days of snowy weather have been a mild headache for Alexandria’s emergency management team, but all things considered: staff says things are going pretty well.

“Things are going good” said Jeff Duval, deputy director of Transportation and Environmental Services. “We’ve had a few days of challenging weather. The storms has been persistent, they’ve come and gone with multiple bands.”

Duval said the cycle of “snow, sleet, ice, back to snow, back to sleet” has been sort of a headache for traditional emergency management operations. The cause: Alexandria’s two-day snows are the result of two weather events coinciding.

“We’ve seen it all in the last couple days,” Duval said. “It’s actually two storms in the last two days; one from West Coast and a low pressure storm off the coast of Virginia. It made this one a little bit different, but nothing too crazy.”

Overall, Duval said there hasn’t been a particular spike in calls for service, largely because many of those who would be driving around and stuck in bad weather are at home due to the pandemic.

“It’s been fairly quiet,” Duval said. “A lot of folks are still working from home due to COVID pandemic, so traffic volume is down and schools already virtual. We didn’t have a lot of pressure towards getting schools open.”

Widespread working-from-home is windfall as the city faces heavy snowfall.

“This was, for us, the most significant [winter] storm we’ve seen in a couple years, so it was good to get back into the swing of winter operations,” Duval said. “We do tremendous prepping for winter operations, like tabletop exercises, but until you get a storm and can exercise a system — that’s when we get our best practices.”

The main challenge has been keeping crews safe and spirits high when they’re unable to gather in-person. Duval said crews traditionally have “muster meetings” at the beginning and end of shifts, but operations had to change to keep the teams safe.

“We’ve been at it for almost a year though with that and other activities,” Duval said. “We do an after-action after every significant event. We typically put drivers in a room and ask what went well, but we’ll have to do that a little differently.”

Now, Duval said his team has their eyes on the upcoming weekend as they wait to see whether there’s more snow in stock for the city.

“We’re watching the weather; there could be additional precipitation this Sunday,” Duval said. “It’s still a little far in advance to say, but thats’ what we do this time of year.”