In an update to the City Council, Police Chief Michael Brown said many of the recent shots fired incidents in Alexandria are related.

It wasn’t exactly surprising news, given that many of the shootings took place in the same concentrated areas — two this month took place less than a block apart — but it was a rare glimpse into investigations where local police are keeping their cards close to their chest.

“These are active investigations [that are] currently going on, so I have to be careful not to disclose too much information,” Brown said.

There were 55 confirmed cases of shots fired in 2020, Brown said, adding that roughly one third of them were related to a particular criminal activity — he wouldn’t specify which — and one-third of the shootings took place between September and December.

The types of shootings are often unalike, though. Brown said one of the three shootings earlier this month involved a car pulling alongside another and the driver of one shooting into the other vehicle.

One of the most high-profile incidents was a shootout in the West End in September as drivers and passengers in multiple vehicles exchanged fire. At least one person, Adham Heiba, was arrested in connection to the shooting and police have been investigating others.

In total, Brown said police have made 20 arrests, executed 90 search warrants, and removed 17 guns and other weapons.

A heat map showed that the majority of the shootings were in North Old Town. 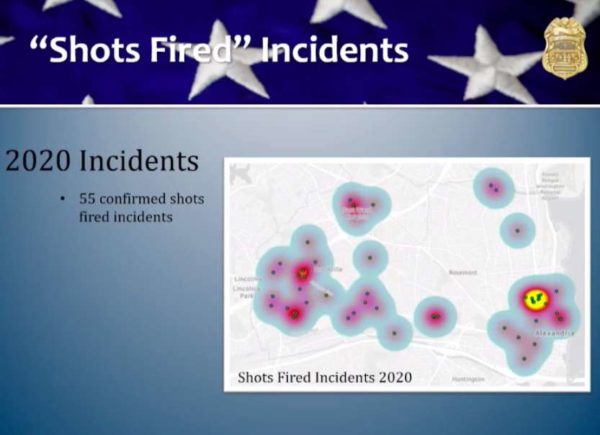