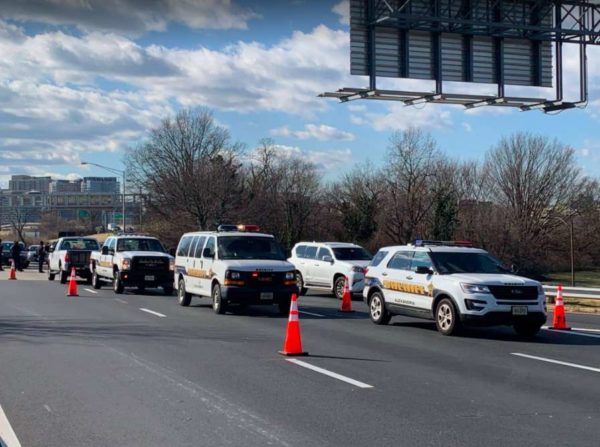 The 14th Street Bridge going into Washington, D.C. has been completely shut down, and the Alexandria Sheriff’s Office and Police Department are among the law enforcement agencies that have blocked traffic on the bridge since 6 a.m. this morning.

“We’ve never been asked to do anything like this before,” Captain Sean Casey of the Alexandria Sheriff’s Office told ALXnow. “We’re at the bridge right now. It was quite a sight this morning, because there was still plenty of traffic. We started at just before 6 a.m. securing and shutting down the bridge. You now cannot cross the 14th Street Bridge, with very few exceptions.”

It’s all part of the heightened security around the inauguration of President-elect Joe Biden, a direct result of the Jan. 6 siege on the U.S. Capitol by supporters of outgoing President Donald Trump.

Alexandria is just a participant in the U.S. Secret Service’s joint transportation plan surrounding the inauguration. Supporting agencies that have shut down bridges into the District include the Virginia State Police, U.S. Customs and Border Protection, Arlington County Police, the Herndon Police Department and the U.S. Capitol Police.

There are about a dozen Alexandria Sheriff’s deputies assigned to the detail, and until ordered to leave are planted at the exit for the bridge along the George Washington Memorial Parkway going northbound.

Casey said that the department could spare the deputies, as the Alexandria courthouse will be closed over the next several days.

According to the Chief Judges of the Alexandria Courthouse:

“Due to potential threats to safety of employees and the general public due to the possibility of environmental and/or transportation disruptions, and due to Sheriff’s office personnel having to assist with maintaining security in the D.C. Metropolitan area on January 19 and 20, 2021, the Chief judges declare a judicial emergency pursuant to Va. Code Section 17.1-330, and, therefore, it is hereby ordered that the Alexandria Courthouse shall be closed to the general public on Tuesday, January 19, 2021 and Wednesday, January 20, 2021. Normal court operations will resume on Thursday, January 21, 2021.