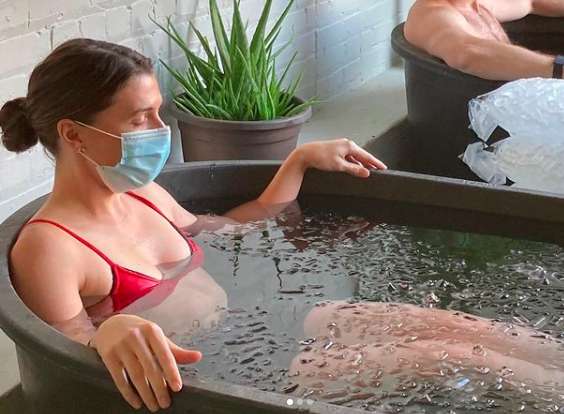 How calmly can you sit in a tub of ice water for three minutes?

Bob Soulliere’s goal is to make you cold, wet and happy. During the winter, most folks like to layer up and get cozy next to the fire with a hot cup of cocoa, but every Saturday you’ll find Soulliere and his clients at The Loop in Old Town doing breathing exercises, taking ice baths and meditating.

“Your breathing determines whether you feel agitated, happy, relaxed, and energized,” Soulliere told ALXnow. “It’s the most direct control knob on your nervous system, and the fear of cold, the pain that people experience with cold, is a huge barrier for most folks. It helps you approach other situations that are uncomfortable or difficult.”

It’s all part of the Wim Hof Method, named after the 61-year-old Dutch daredevil who developed a technique for braving cold temperatures. Hof’s distinctions include 21 Guinness world records, and he even scaled Mount Kilimanjaro wearing just shorts and tennis shoes. He claims that exposing yourself to cold environments, with proper breathing, results in increased energy, better sleep, heightened focus and a stronger immune system.

Soulliere is a crossfit enthusiast, and heard about the method in 2016. He later trained with Hof in Colorado’s Rocky Mountain National Park and became a certified instructor in 2017. His Breathe Your Power sessions started at The Loop over the summer and are held every Saturday from 11 a.m. to 3 p.m.

Participants end up taking a three minute dip in an ice bath after a round of breathing exercises.

“They control a really difficult experience,” Soulliere said. “They do it with fun with a tribe of people supporting them. They find out that they can do way more than they thought they could and it opens their eyes and their heart, and they light up and come away believing more in themselves. If it weren’t COVID times we’d be giving each other massive hugs and feeling that we just won the freakin’ Olympics.”

Remember the end of the movie “Titanic”? Soulliere said Jack didn’t have to die, that he just needed to control his breathing.

“Watch ‘Titanic’, and then see a video of Wim doing the breaststroke around icebergs in the Arctic, just as calm as a cucumber,” Soulliere said. “It’s pretty amazing.”

Photo via Breathe Your Power/Instagram