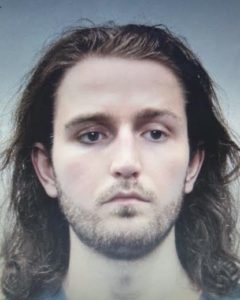 The man wanted in connection to a series of shootings in North Old Town early Monday morning is now in custody.

“He is in police custody and being processed on the felony warrant for possession of a firearm by a convicted felon,” said VSP spokeswoman Corinne Geller. “Additional charges are pending, as the investigation remains ongoing at this time.”

State police released additional information Monday night about incidents that led authorities to urge residents to lock themselves in their homes and eventually resulted in a shootout in which one suspect died.

The series of events started with an armed robbery at the Holiday Inn on First Street around 5 a.m. Almost an hour later, two suspects, including Thompson, were spotted, ran from police, and engaged in a shootout during which an officer was shot, VSP said. Just before 6:30 a.m., following a K9 search, one of the suspects was located and a second shootout between the suspect and police ensued, after which the suspect was found dead.

The incident began Monday at approximately 5:01 a.m. when the Alexandria Police Department received a 911 call for shots being fired at a hotel in the 600 block of First Street in Old Town Alexandria. As officers were responding to the scene, two individuals involved in the shooting had fled the hotel on foot. A perimeter was immediately established and search efforts were underway. Further investigation at the hotel determined that an armed robbery had taken place inside the hotel. No one inside the hotel was injured.

At approximately 5:50 a.m., an Alexandria Police Officer located two suspects – one of them Thompson – and a foot pursuit was initiated. When the officer and the two adult males reached the intersection of North Royal Street and Second Street, the officer and one of the two suspects exchanged fire. The officer was shot and both suspects fled the scene again on foot. The officer has been treated and released for non-life threatening injuries sustained in the shooting.

The search perimeter was expanded and police K9 teams located, at approximately 6:24 a.m., one of the suspects near the intersection of Montgomery Street and North Fairfax Street. As Alexandria police officers engaged with the adult male suspect, shots were fired by both the suspect and officers on scene. The male suspect died at the scene. A stolen firearm was recovered in the male suspect’s possession. No law enforcement at this location were injured.

The man’s remains have been transported to the Office of the Medical Examiner in Manassas for examination and autopsy. Next of kin notification is still pending.

The investigation remains ongoing at this time into all three incidents by state police, with the assistance of the Alexandria Police Department and the ATF.