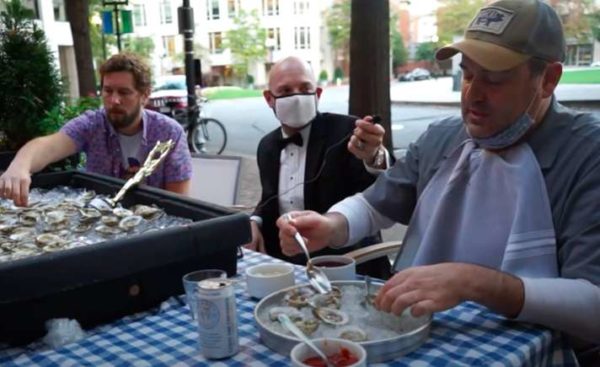 As the first-ever Old Town Oyster Week draws to a close in Alexandria, an oyster eating contest with Del Ray and Old Town business owners resulted in a tie.

Bill Blackburn, of Pork Barrel BBQ in Del Ray and Trae Lamond of Chadwicks in Old Town tied by both eating 103 sea stone oysters in the Pearl of Alexandria Oyster Eating Contest held at Whiskey & Oyster on Thursday, October 15. The competition ended when the restaurant ran out of oysters.

“It’s the best day of my life,” Lamond said during the competition. “I’m loving it.”

Competition between Blackburn and Lamond is fierce, as both respectively captain the Del Ray and Old Town Restaurant softball teams. Del Ray won the first softball game in 2018, followed by Old Town last year, but this year’s game was called off due to the pandemic.

The contest was live streamed by The Zebra, and ALXnow’s James Cullum was the emcee.

103 oysters apiece. Nice work Bill Blackburn and Trae Lamond in eating all the oysters at Whiskey & Oyster. No winner of…

“Be sure that next year… this competition will be expanded in some way to include more restaurants, more restaurateurs and more charities,” Blackburn said.

“I could have easily eaten 30 more,” Lamond said after the end of the contest.

“I could have eaten 100 more,” Blackburn countered.

Both contestants now have to pay $5 per oyster eaten to the others’ charity of choice. Blackburn chose Casa Chirilagua in Arlandria and Lamond chose Children’s National Hospital.

A dozen restaurants participated in Oyster Week, which ran from October 12-17. The event was created by the Old Town Business Association and Guinness Beer.

Photo and Video via Taylor Brown