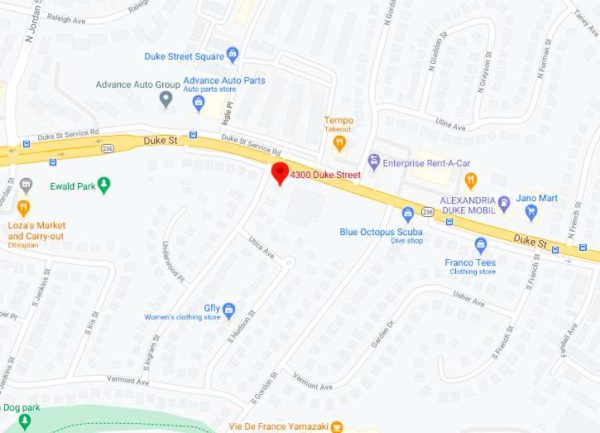 An Alexandria woman turned herself in after claiming to have fired a warning shot at a man on Sunday, September 27.

The incident occurred at around 8 p.m. in a parking lot of the Fields Apartments (4309 Duke Street). Police received multiple 911 calls and found a single bullet casing on the ground.

A witness told police that a woman and man were having a “loud verbal argument” and saw “the female pull a handgun out of her purse. (The witness) turned away in fear, and then heard a ‘pop,'” according to a search warrant affidavit.

The man ran away and the woman reportedly then went into her building. She later turned herself into the police. She presented documents that she owned the gun and told them she fired a “warning shot to prevent the male subject from harming her,” according to police.

There were multiple calls for shots fired in the city that weekend, and police have asked for the public’s help in identifying suspects after a surge of violent incidents.

NOTIFICATION :: The Alexandria Police Department is investigating a “shots fired” call for service in the 4300 block of Duke Street. There are no injuries. Expect police activity in the area.