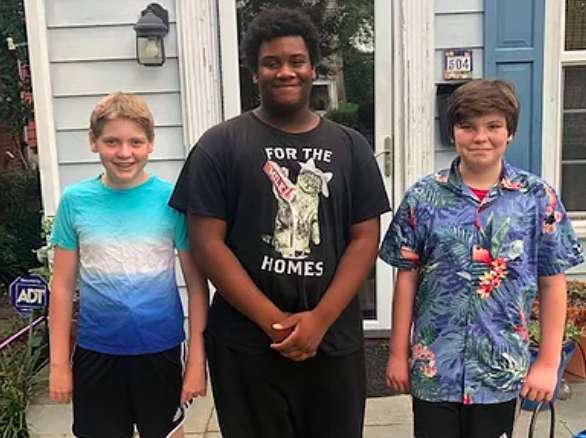 What did you do on your summer vacation? Three Alexandria kids started a new business, ThePoopBrothers, and their mission is to make easy money by picking up dog poop.

“I was walking around with my dad, and we were talking about what kind of ways to make money over the summer,” Beckett Sawyer said. “I was talking about mowing lawns and stuff, and then he suggested  picking up poop, and I started laughing because I thought it was a joke.”

It was no joke, and soon Beckett, 13, and his 14-year-old brother Sawyer and their 14-year-old friend Dante Thomas got involved. The trio founded their company about a month ago and started placing door hangers around the city.

Here’s how it works: Customers email ThePoopBrothers and the price escalates depending on how many pets you have and how far away your house is.

“It’s $10 each week, but if you want us to pick up twice each week then it’s $16, and each extra dog is about $1 extra,” Beckett said. “We use grab bags and then we’ll pick it up and then we’ll throw it away. So, it’s pretty simple, and it’s not too time consuming. It’s not too difficult, either.”

Sawyer said that business is slowing picking up.

“We don’t have like 50 clients,” he said. “I think we have four now, and we’re waiting for the advertisements to do their part, and maybe after all the press interviews we’ll get more business.”

Beckett said that he and his partners are fearless.

“We’re extremely cool,” he said. “We’re fearless in the art of picking up poop.”