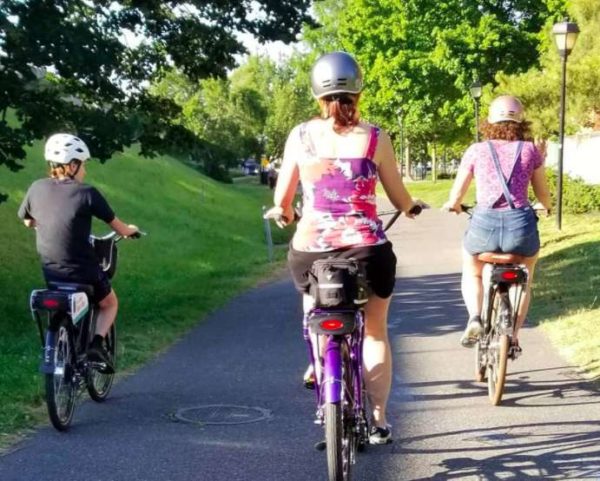 Todd Ketch has had a busy summer at his Pedego Electric Bikes shop in Old Town. Six months ago, he was worried that the pandemic was driving away too many locals and tourists, but that business has steadily gained speed as fewer of his customers are commuting to the office and want to get around town fast without parking issues.

“It’s been a busy summer, and I believe it will continue right into the fall,” Ketch told ALXnow. “It’s exhilarating, and fires off
those good endorphins in the brain. It’s addictive.”

Other stores, like Big Wheel Bikes, have seen demand increase so much over the last few months that there’s a waitlist for new bicycles.

Three models are available to buy and rent at Pedego, ranging in price and amenities. Prices range from $1,995 to $5,495 for bikes that can go up to 60 miles on a single charge (without pedaling) and travel at 20 miles per hour. One model can even be retrofitted to travel 28 miles per hour. A single rentals will cost $100 for the entire day, $70 for four hours or $40 for two hours.

Ketch, who is a licensed Pedego dealer and not a franchisee, has been in business at 210 N. Lee Street for two years. He’s a former lobbyist and government affairs executive who left the world of politics behind after getting back surgery and trying out a Pedego bike. He’s married with four children, lives in Woodbridge, and one day wants to move to Alexandria so that he can commute to work on one of his bikes.

“The dream is to open up additional locations in the not-to-distant future,” he said. “I’m very happy to have started here in Alexandria. It was the very right place to be and it’s got the right mix of residents and the proximity to Washington, D.C., and the trails and everything else that you want to have for this kind of a shop.”