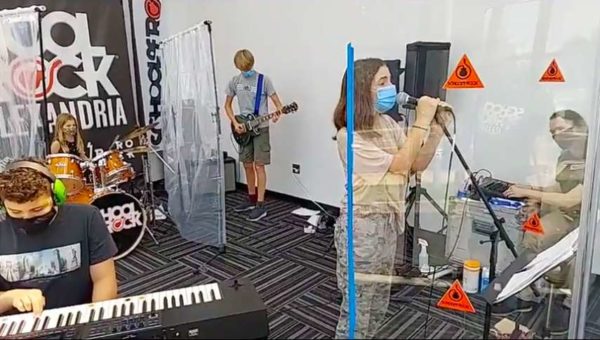 The “Modern Rock Camp” at School of Rock Alexandria (3260 Duke Street) has plexiglass screens, and on a recent August afternoon the band “Horses Ate My Dad” broke their long silence and played a virtual gig.

The kids were safe distances apart and played with face masks.

“We’re a safe place, and kids want to socialize,” School of Rock owner Steve McKay told ALXnow. “School Of Rock is all about putting kids together in groups. They learn so much faster, but so much has changed and I’m not gonna let them down.”

McKay said that he lost 40% of his business and was completely virtual for the first two months of the pandemic before cautiously reopening. Now, with smaller in-person class sizes, plexiglass screens and students spread out (in addition to the Zoom classes), McKay is booking gigs at venues in the area, including at the Workhouse Arts Center in Lorton, The Electric Palm Restaurant in Woodbridge and at the Lee District Amphitheater in the Alexandria area of Fairfax County.

The school lost a lot of their younger kids because it’s tough keeping them under control in a group setting, McKay said. Other changes include the addition of an adult band that will start playing in October.

“Folks have been isolated for months, and to get together again and rehearse and see their friends feels just amazing,” McKay said.

2 shows this weekend for our House Band. Come out to enjoy some socially distanced live music. #sor_alx

Posted by School of Rock Alexandria on Wednesday, August 26, 2020

Photo via School of Rock Alexandria/Facebook

END_OF_DOCUMENT_TOKEN_TO_BE_REPLACED

More Stories
Poll: How Comfortable Are You Shopping and Dining?Ask McEnearney: Using Bridge Financing to Purchase a Home Without Selling First