Construction will soon begin to renovate Parker-Gray Stadium at T.C. Williams High School, and that means a 150-year-old oak tree will soon be demolished, according to Alexandria City Public Schools planning staff.

Over the last several weeks there has been renewed discussion over the fate of the Witness Tree, which the school system said must go to make way for a new concession stand. A Change.org petition to save the tree even garnered more than 2,500 signatures.

John Finnigan, the acting director of Educational Facilities for Alexandria City Public Schools, said that a contractor for the project has been chosen and that work will likely begin in the next few weeks.

“It’s a very tight site and that is a very large tree right in the middle of our developable footprint,” Finnigan said in an online chat on Monday night. “The tree was unfortunately unable to be saved, but because of that we are planting around 31 new trees.”

Alexandria activist and historian MacArthur Myers says it is shameful to cut the tree down.

‘The Witness Tree is part of the soul of the Woods Place community,” Myers said. “ACPS has missed another opportunity to heal the community.” 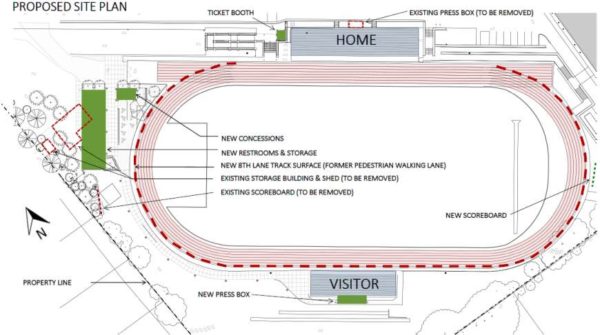 Boyd Walker said that cutting the tree down conflicts with the city’s climate goals.

“It is unfortunate the school board has refused to request to save a tree that would provide oxygen, shade and carbon capture for decades to come, to the future students at the school and the athletes who will use this field,” he said.

Finnigan said that construction will be conducted from Monday through Friday, from 7 a.m. to 6 p.m. and on Saturdays from 9 a.m. to 6 pm.

According to ACPS, the project includes: