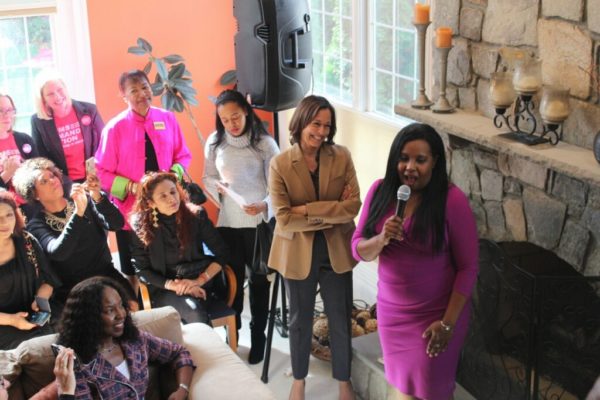 U.S. Senator Kamala Harris was named Joe Biden’s vice presidential candidate on Tuesday, and some in the deeply blue Alexandria are celebrating.

“I congratulate Vice President Biden, who knows better than anyone the importance of this decision, on his excellent judgment, and I congratulate Senator Harris,” Beyer said in a statement. “This is a ticket that will get things done.”

Mayor Justin Wilson said he appreciated Harris’ background in local politics. The California Senator previously served as a district attorney in San Francisco and as Attorney General of California.

“I’m super excited,” Wilson said. “I was excited to endorse her a year ago for president. I thought she brought an important voice to the ticket. At a time where a clear vision for the future of the country is needed, she’s not only someone who can articulate that vision but she’s also really a fighter. She showed that in the Senate and in California.”

It’s one of the few traits she shares with her opponent, Vice President Mike Pence, who was a Congressman from 2001 to 2013 and then governor of Indiana from 2013 to 2017.

“I’m also particularly excited as someone privileged to lead a city,” Wilson said. “I’m excited to have someone who comes out of a city and has experience in city government. There is a lot of urban innovation and I’m hopeful the federal government will be back as a partner… as it relates to housing and economic and workforce development.”

Federal and local partnerships had been particularly vital over the last few months as the city utilized federal CARES Act funding to programs like rent assistance and small business grants.

Del. Charniele Herring was also an early supporter of Harris and shared her reaction on Twitter.

I am extremely excited that @KamalaHarris will be our next Vice President! There is no one as qualified or deserving, congratulations! #KHive #KamalaHarrisForVP pic.twitter.com/WX9nJs9Ego

“A winner of three statewide elections in America’s largest state and a smart, tough, effective leader, Harris lives and breathes our country’s progressive values,” Del. Mark Levine wrote in an email. “I’m confident she will give Biden good advice in the Oval Office and be an effective President, if necessary, in the event of tragedy.”

“Amid a strong field of highly qualified women, Senator Harris stands out as a powerful and historic choice,” said Congressman Don Beyer. “Senator Harris’ leadership in America’s largest state, her commitment to progressive ideals, and her battle-tested record in the U.S. Senate all speak to her readiness to serve. If elected, she will break barriers as the first woman, the first Black American, the first Asian American, and the first HBCU graduate to hold the office. Kamala Harris will be a great Vice President.”

Harris has faced some criticism from Democrats further on the left who say she did little to prosecute cases of excessive force by police and has referred to herself as a “top cop,” according to the New York Times — is tone deaf in an era of widespread protest against police brutality and injustice.

We are in the midst of the largest protest movement in American history, the subject of which is excessive policing, and the Democratic Party chose a “top cop” and the author of the Joe Biden crime bill to save us from Trump.

The contempt for the base is, wow.

Wilson said he recognized those concerns but said that Harris’ experience inside the judicial system will mean she has the experience to make changes.

During the campaign, neither Harris nor Biden visited Alexandria (which voted overwhelmingly for Biden in the primary). Wilson said he hopes the situation will be improved enough to have campaign rallies in Alexandria, but that currently the public health considerations come first.

James Cullum contributed to this story
Photo via Charniele Herring/Twitter