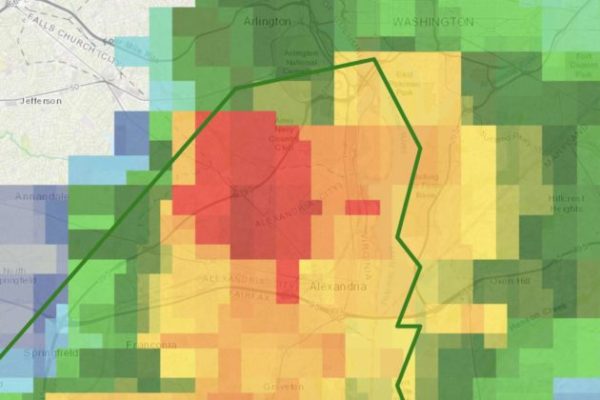 Flood concerns earlier this week connected with Tropical Storm Isaias ended up being a wash, but there’s a new round of flood warnings related to ongoing storms in Alexandria.

The National Weather Service has issued a flood warning for the City of Alexandria and some surrounding localities in effect until 8:45 p.m.

“Doppler radar indicated thunderstorms producing heavy rain which will cause flooding,” the NWS said. “Up to one inch of rain has already fallen. Additional rainfall amounts of up to one inch are possible.”

The NWS warned that anyone encountering flooded roads should turn around, as most flood deaths occur in vehicles. Excessive runoff from heavy rainfall could also cause flooding to small creeks and streams, urban areas, highways, streets and underpasses as well as other low-lying places.

The Flash Flood Watch was expanded to now include all of northern/central VA, the WV panhandle, and all of central/southern MD. It was also extended until 6 AM Friday morning. Heavy rain is expected to develop this afternoon into tonight and could lead to flash flooding. pic.twitter.com/t33klZNzLm