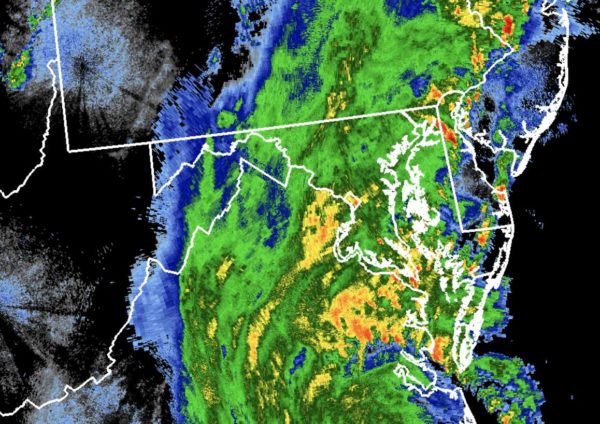 The weather is expected to make a dramatic turn over the next few hours.

After some early preparation last night by the Alexandria Fire Department and other city agencies, yesterday’s Flood Watch has been upgraded by the National Weather Service to a Flood Warning for Alexandria and surrounding localities.

Today’s bad weather is the result of Isaias, which made landfall in North Carolina last night as a Category 1 hurricane and is moving north. It has since been downgraded to a tropical storm.

A Flood Warning means flooding is imminent or occurring. For those driving, the National Weather Service said to turn around and not to risk flooded roads as most flood deaths occur in vehicles.

* AT 700 AM EDT, DOPPLER RADAR AND AUTOMATED RAIN GAUGES INDICATED THAT HEAVY RAIN WAS FALLING OVER THE AREA. THE HEAVY RAIN WILL CAUSE FLOODING. UP TO ONE INCH OF RAIN HAS ALREADY FALLEN.ADDITIONAL RAINFALL AMOUNTS OF SEVERAL INCHES ARE POSSIBLE, AND FLASH FLOOD WARNINGS COULD BE REQUIRED LATER TODAY. FOR NOW, THOUGH, FLOODING WILL BE RELATIVELY SLOW TO DEVELOP.

Isaias is moving NE across NC, crossing our region through the early PM. Heavy rain will intensify with significant flood potential, especially near & east of I-95. Winds will also increase in these areas, with wind damage possible. Tornadoes also possible, mainly near the Bay. pic.twitter.com/wUyXqUxsuz