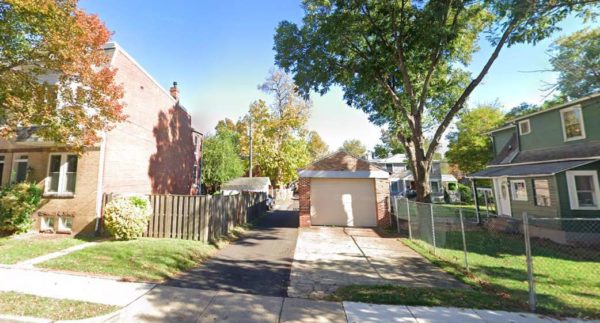 An unnamed alleyway through a Braddock neighborhood could soon be named after recently-retired Alexandria Judge Nolan Dawkins, the first Black judge in the city’s history.

The alley runs between the 400 blocks of N. West and N. Peyton streets, where Dawkins grew up. Kimberly Dawkins, Judge Nolan Dawkins’ daughter, said the renaming was originally intended to be a surprise (sorry) celebration for the retired judge.

“Our neighbor said it would be nice to honor dad, because he’s been in this house all his adult life,” Kimberly Dawkins said. “It would be a nice way to commemorate that the Dawkins have lived on this street, and were the second black family to live on this street in the 60s.”

“Judge Dawkins was born in Alexandria, grew up in this Peyton Street home, attended Parker-Gray High School in 1963, and was among the first African Americans to integrate George Washington High School graduating in 1965,” the application said. “In 1989, following his mother’s death, he moved back into his Peyton Street boyhood home.”

The application to rename the street is scheduled to go to the Planning Commission in October.

“The retirement of The Honorable Nolan B. Dawkins, former presiding Circuit Court Judge for the City of Alexandria, on June 26, 2020, represents the culmination of a lifetime of dedicated service, professionalism, and judicial excellence,” the application said. “He is a true son of the city and has devoted his entire legal career to justice and to the community of Alexandria, Virginia. It would be a fitting honor and tribute to have his name represented on this alley.”

Kimberly Dawkins said the City of Alexandria has been a welcoming home for the Dawkins family and has been a part of their lives for generations.

“Alexandria is a great city,” Kimberly Dawkins said. “My sisters and I grew up here and went through ACPS. It’s a wonderful place to raise a family. The diversity and opportunities are endless.”

Top photo via Google Maps, map via City of Alexandria