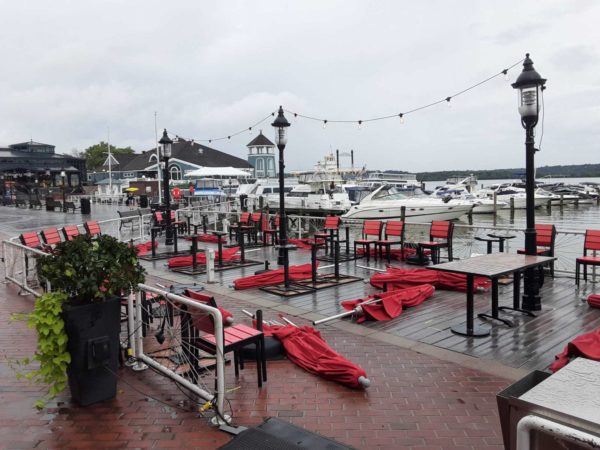 As Alexandria hunkers down for potentially heavy rainfall from Tropical Storm Isaias, some local services have been suspended.

The northern entrance to the King Street Metro station will be closed.

“The north entrance at King Street Station will also be closed Tuesday due to the potential for flooding,” Metro said in a press release. “Customers should use the station’s south entrance instead.”

The city has also suspended its curbside trash and recycling collection today.

“Residents who normally receive collection on Tuesday should not place bins or bags curbside on Monday night or Tuesday morning, and should secure any bins or bags already placed outside,” the City of Alexandria said.

Trash and recycling collection will “slide” by one day this week:

Residents needing to dispose of storm debris from their property or home can place it curbside for pickup during their next trash and recycling collection day.

While the main body of the storm has mostly passed Alexandria and the rain is starting to taper down, flooding can still occur after a period of intense rainfall.

Remember that river and creek flooding is usually delayed for a period after rain ends.

🔈Remember Friends, where the rain may start to taper off, flash flooding can still happen for hours after that.

In a map of service requests from the flooding two weeks ago, North Del Ray and Old Town were both areas of high concentrations for flooding.

Our staff continues to assess the impact of last week’s storm which dropped 2-3” of rain in 30 minutes and caused flooding and sewer backflow in many places in our City.