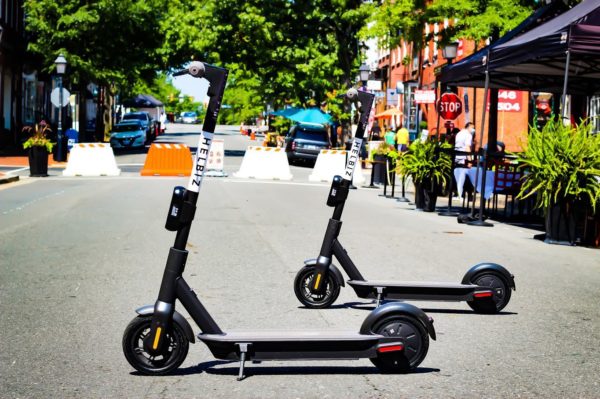 After a launch delayed by the pandemic, mobility company Helbiz has started putting scooters onto Arlington and Alexandria streets.

The company announced yesterday that it would immediately move forward with bringing 100 new scooters to locations in Arlington and 200 to Alexandria. Like other scooter companies, like Lime or Bird, Helbiz scooters are unlocked by scanning a code in an app, riding with cost determined by distance, and parking.

“The vehicles will also be able to operate between these cities’ for riders’ convenience,” the company said in a press release. “These fleets follow the company’s successful launch of e-bikes in neighboring Washington, DC, highlighting Helbiz’s continued growth in the area and its commitment to offering eco-friendly micro-mobility solutions to the community.”

Helbiz — an Italian-American transportation company founded in 2015 — also brought scooters and e-bikes to Washington D.C., according to DCist. While Helbiz was approved for e-bike use in Alexandria, the company said those plans have hit a snag.

“We plan to launch a fleet of 200 e-bikes in Alexandria in Q4 of this year,” said Gian Luca Spriano, Director of International Business Development. “Unfortunately, our bike manufacturer experienced delays due to COVID, and we’re working closely with them to get our bikes in Alexandria as soon as possible.”

The distribution and access to scooters have faced some concerns at the Alexandria City Council that the programs disproportionately favored wealthy, predominately white Old Town at the exclusion of lower-income communities. In response, Helbiz said in a press release that it has launched the Helbiz Access Program to provide discounts on rides for low-income residents.