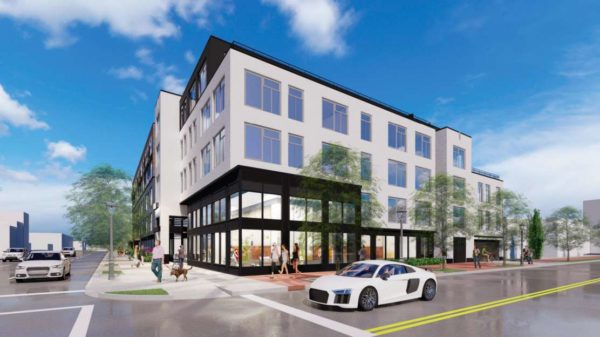 There were public concerns about the massing, height, and construction hours for the newly approved development at 701 N. Henry Street. Behind those criticisms though was a recurring theme: many residents of the city’s historic Parker-Gray neighborhood are unhappy with the new density coming to their neighborhood.

Before it was part of the trendy Braddock neighborhood, with Metro adjacent coffee shops and bars, the Parker-Gray neighborhood was a historic black community formed as a haven for former slaves after the Civil War and solidified into a distinct center of Black life in Alexandria during segregation, according to the Washington Post.

With increasingly upscaled development coming to the neighborhood, however, many at a City Council public hearing last night for 701 N. Henry street directed their frustrations with new developments they see as literally overshadowing local homes at the proposed five-story building.

“The Parker-Gray district started in the ’60s, now we are facing the dilemma of splitting the block and putting together historical regulation with no regulation,” local resident Isabelle Zorro said. “That leaves us in a very difficult situation. What I’m counting on with you, the Council, is to look at this in a different way. We don’t believe this is fair. We would like you to represent us.”

Local residents voicing concerns about new development near their homes is nothing new to Alexandria, but the developments in Parker-Gray are complicated by concerns about gentrification in a historic black community.

“I have been a longtime resident over 50 years,” said Bernice Johnson. “This is kind of personal for me because this home I inherited was my parents’ struggle and I am proud to live here where they succeeded in becoming homeowners in the ’60s. Our neighborhood has a very personal history to me… Our neighborhood history must be preserved, not erased by a massive five-story building that has no contact or history with our neighborhood.”

Despite the concerns from residents, some on the Council said there was nothing legal or technically wrong about the applications. Councilman Mo Seifeldein repeatedly said he believed the city could have gotten more affordable units than the seven units required as part of applying for bonus density, but admitted that concern wasn’t exclusive to this project.

Cathy Puskar, representing the project developer, said the development was not unlike other new buildings nearby.

Ultimately, the City Council unanimously approved the project. Despite the approval, Mayor Justin Wilson said he appreciated the input given by the nearby residents and said it created “thoughtful engagement” on the project.

“It’s going to be large, that’s for sure,” said Redella ‘Del’ Pepper. “These are delightful neighbors and I do hope, when all of this is built and people get to know each other, there will be good relationships.”