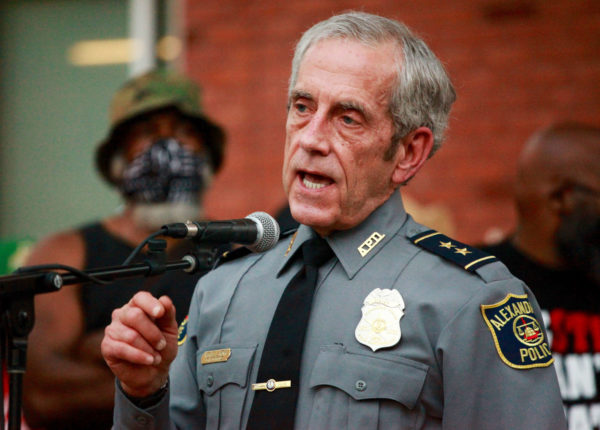 The Alexandria Police Department released a statement on the use of force on Tuesday evening on its use of force policies and accountability.

In its online list of Frequently Asked Questions, the department states that the use of force should only be used as a last resort that “should be avoided when possible, even when legally justified.”

Officers are also not allowed to use choke holds.

Alexandria Police Chief Michael Brown said that the use of force is dehumanizing.

“It is the policy of the Alexandria Police Department to only use the force necessary to accomplish lawful objectives, and to be accountable to the community for its use,” Brown said.

The full press release is below.

In response to many recent questions from the public, the Alexandria Police Department has shared a list of Frequently Asked Questions (FAQs) and answers about accountability and use of force. The resource includes information about officer vetting and training; de-escalation tactics; how force may be used and must be reported; ways in which the department stays accountable to the community; body-worn and vehicle-mounted cameras; and other topics.

“Each police officer in Alexandria has sworn an oath to support the Constitutions of the United States and the Commonwealth of Virginia, and to faithfully and impartially discharge their duties,” said Chief of Police Michael L. Brown. “We take this oath as a promise to everyone in Alexandria that we are here to protect and serve them competently, courteously and professionally, and with the highest regard for human life and dignity. Use of force is dehumanizing and should be avoided whenever possible, even when legally justified. It is the policy of the Alexandria Police Department to only use the force necessary to accomplish lawful objectives, and to be accountable to the community for its use.”

Alexandria maintains a modern, highly-trained, skilled, energetic, diverse and well-equipped police department, which has been nationally accredited by the Commission on Accreditation for Law Enforcement Agencies since 1986. The department is currently accredited at the Gold level, which requires meeting 459 standards. Alexandria has joined the Obama Foundation’s pledge for action on police use of force, and has asked Campaign Zero to review and list its policing policies at 8cantwait.org.

Alexandria police officers each receive over 800 hours of basic training, including more than 116 hours in the appropriate use of force; 21 hours in preventing bias; 12 hours in interpersonal communication, ethics and leadership; and nine hours in communicating with specific groups such as individuals with autism, who are deaf, or who have physical disabilities or mental health challenges. Additional training is provided on a continuous basis during each officer’s tenure.

Visit alexandriava.gov/Police for more information about the Alexandria Police Department.