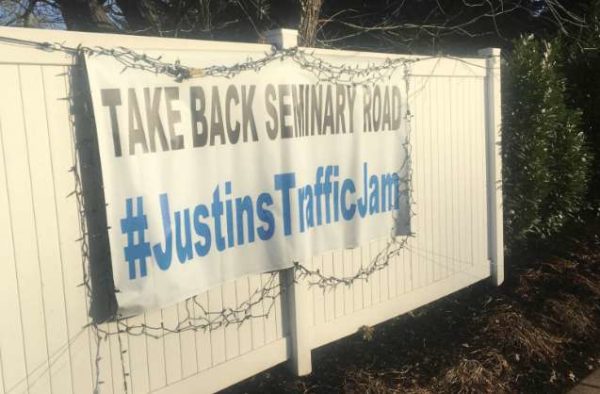 (Updated 4:55 p.m.) With coronavirus, national outrage over police violence against black Americans, and a host of other issues taking center stage in 2020, the debate over Seminary Road that dominated discussions last year got pushed to the back burner, but the issue is making a small comeback at a Board of Zoning Appeals meeting next week.

A sign saying “Take Back Seminary Road #JustinsTrafficJam” was prominently displayed at 1420 Key Drive but has been cited by the city as being in violation of zoning ordinances. An appeal of that citation is scheduled for review at the Board of Zoning Appeals meeting on Monday, June 8.

The owner of the sign, in an appeal, said he had never had problems from the city putting similar signs on the fences before and believed the sign was targeted for political reasons.

“I believe that I have been specifically singled out for my sign because it makes a political statement,” the owner said. “I have reached this conclusion for several reasons, including that during the previous times I have put a sign on my fence, no one in the city government has ever had a problem.”

When the homeowner pointed to other signs nearby of similar size, he was told that the ordinance was selectively enforced based on complaints.

“There are numerous other signs around the city that have been up for months and sometimes over a year that flagrantly violate the city’s sign regulations, but only mine has been singled out as violating the regulation,” the owner said. “This type of selective enforcement for purely political purposes is not only a violation of my free speech, but is just wrong.”