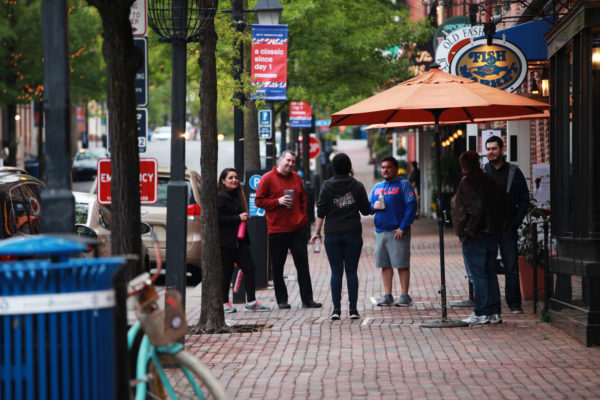 Pedestrians are getting a little more room to walk down King Street this weekend, but the new changes aren’t the planned pedestrian zone that has stirred up conversations in Old Town.

“The City has temporarily widened the sidewalk on the south side of the unit, 100 and 200 blocks of King Street, to allow more room for pedestrians to stay at least 6 feet apart while walking,” the city said in a press release.

Starting at 7 p.m. tonight, traffic will be prohibited from driving east on King Street past S. Fairfax Street, Alexandria Living Magazine first reported. The City of Alexandria clarified, however, that this isn’t part of broader pedestrian zone plans, but is instead an attempt to stall the spread of coronavirus as more people take to city streets.

“We are just widening the sidewalk on one side of the street to help pedestrians observe physical distancing guidelines,” City spokesman Craig Fifer said in an email. “Vehicular traffic will be one-way instead of two-way on those two blocks to free up the space used to widen the sidewalk. This is not related to the King Street Place proposal, and is not intended to encourage anyone to come to the area.”

The change will be in effect until Tuesday, May 26, according to the city. The city will also have additional law enforcement in the area to maintain compliance with the law. Northern Virginia is still under a stay-at-home order and gatherings of more than 10 people are still prohibited, with only essential trips outside of home permitted.

“To accommodate the wider sidewalk, vehicles on these three blocks may travel one-way westbound only (i.e. away from the river),” the city said. “Pedestrians, motorists and cyclists should stay alert and observe all posted signage and instructions from law enforcement officers.”

At the height of the pandemic, Classical Movements held weekly open-air concerts with world-renowned musicians in their “Secret Garden” in Old Town North. Business is slowly returning to its hectic…