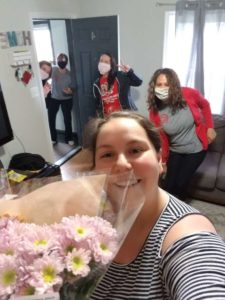 With schools being closed for the duration of the school year and Alexandria still in lockdown until the end of May, Alexandria City Public Schools highlighted the annual faculty awards in an online post celebrating the support staff, teacher, and principal of the year.

ACPS announced the winners on Monday, May 18.

Sharpe is not only a building engineer at T.C. Williams High School Minnie Howard Campus and an employee for 36 years, he is also a class of ’78 Titan who holds the school record for longest kickoff return for a 96-yarder set in 1978.

Sandoval, a physical education teacher at Cora Kelly School for Math, Science and Technology, arranged for swimming lessons for every fourth grade student in her school.

ACPS highlighted Sharpe in a post on Monday and Sandoval in a post today (Wednesday), with an upcoming message that will honor Johnson on Friday.

The schools also recognized and celebrated National Merit Scholar Leah Nickelsburg. Nickelsburg, a senior at T.C., was awarded $2,500 by the academic organization that recognizes excellence in students across the U.S.

ACPS also announced more plans for graduation on Saturday, June 13. A virtual ceremony will be streamed starting at 9:30 a.m. on ACPS TV Channel 71, Facebook Live and the ACPS website.

“While our school closures due to the COVID-19 pandemic have upended our traditional ending to a school year, we have been hard at work trying to plan the most meaningful and special ways to recognize you while also being responsible to ensure our duties to prevent the spread of any disease and ensure public safety and health,” said T.C. Principal Peter Balas.

The keynote address is scheduled to be given by world champion sprinter Noah Lyles, a 2016 T.C. graduate who is part of the US Olympic team that was originally scheduled to compete in Olympics in Tokyo, Japan this summer.