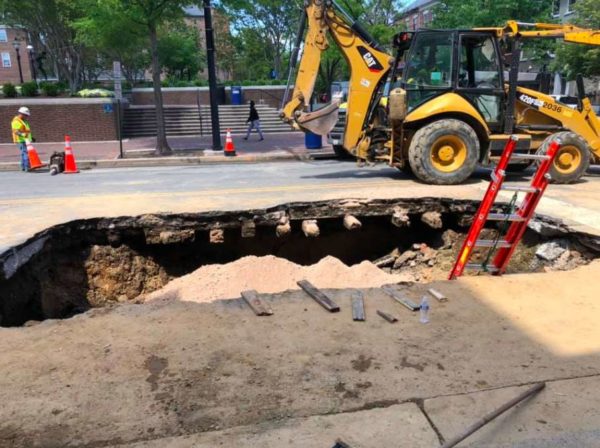 The Alexandria Department of Transportation and Environmental Services was repairing a water main break on King Street yesterday when a historical discovery was made.

A work crew uncovered streetcar rail lines from the city’s electric streetcar, which ended in 1932.

“In 1906, 30 daily trains between Mount Vernon and Washington carried 1.7 million passengers, a number that was likely boosted by the opening of an amusement park along Four Mile Run with its own station,” according to the city.

The streetcar was established in 1892 and went from the city to Mount Vernon, and was expanded to Washington, D.C. in 1896.

There is currently a free King Street Trolley that runs from the King St-Old Town Metro station to the waterfront, but the trolley is not running until further notice due to COVID-19.

There is a lot of history buried beneath Alexandria, like when an 18th century ship was uncovered at a construction site in 2018.

For those of you who are missing the King Street Trolley, it looks like Transportation & Environmental Services, City of…

END_OF_DOCUMENT_TOKEN_TO_BE_REPLACED

More Stories
There Are Now 1,396 COVID-19 Cases in Alexandria, No New DeathsTrends in Positive Tests and Hospitalizations Remains Sticking Point for Reopening Alexandria