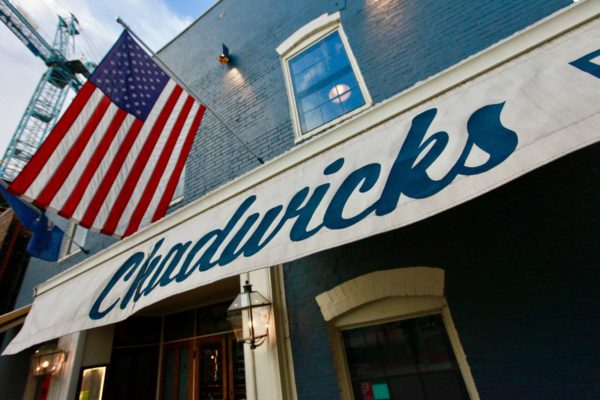 It’s been an incredible challenge, but Chadwicks owner Trae Lamond is hopeful everything will get back to normal with his business… eventually.

The 39-year-old Lamond was forced to lay off a majority of his 50 full and part-time staffers, and since March the favorite bar and restaurant for many Old Town residents has been working with a skeleton crew of about 17 employees.

“The first two weeks of this thing, I had this rosy idea that everyone was going to stay on board, and we were gonna do just fine and nothing was gonna change, and it hit me like a ton of bricks,” Lamond told ALXnow.

He added that he is cautious regarding the governor’s recent announcement of reopening the state’s economy.

“I trust him [the governor] as a doctor, but I hope we’re doing this at the right time. I hope we’re not going to have to go through this kind of shutdown again,” he said.

Lamond was a bartender and manager at the 30-year-old restaurant, located at 203 Strand Street, for nearly a decade out of college before buying it in 2015. He even met his wife at Chadwicks, and the couple have two kids and live in the city’s Rosemont neighborhood. Earlier this year, he sank all of his reserve funds in renovating the interior of the building, and just as the weather was turning nice and spring was unfolding, the coronavirus pandemic forced many businesses to shut down.

Chadwicks shut its doors and had online ordering up and running early in the process, Lamond said, which prepared it for carryout and delivery service.

“We’ve kind of reached that cycle of emotions, of panic at first and then all the stress,” he said. “Now we’ve got a routine, and it’s it’s like going from running a 200 seat restaurant to running Domino’s franchise or something.”

“I think I had one bad day, towards the very beginning,” Lamond said. “You know, less than five years ago I was bartending at Chadwicks. I am still new to this. I had a long call with kind of my accountant, who is one of my mentors, and he talked me through what bankruptcy sounds like and losing the business. It was a phone call that needed to happen for a reality check to keep the business.”

Lamond said early on he wanted to keep everyone on board but discovered quickly that wouldn’t be feasible.

“It was early on and I wanted to take care of my staff, but then at the same time you need someone to slap you across the face and say, ‘Hey, if this restaurant isn’t here after this is over, nobody’s got a job,'” Lamond said. “The restaurant itself is the most important part of this. That needs to survive.”

With every online order, customers can also donate to the company’s employee relief fund, which has so far raised $3,500 for affected staffers. Lamond has set a personal goal of raising and distributing $10,000.

“In that first week or two, I lost like 15 pounds and I definitely didn’t sleep,” said Lamond, adding that he was working more than 12 hours a day seven days a week at the onset of the pandemic.

The company has also secured a Paycheck Protection Program loan through Burke and Herbert Bank, which opened a line of credit for Lamond.

Lamond said that regular customers have been supportive, even showing up for carryout the same days of the week they would usually dine inside.

“Mike and Marsha, they sit upstairs at the same table every Monday,” he said. “If they can’t make it, they’ll dump $50 or $100 in the employee support fund. Like clockwork every Monday, right on time we’ll get their order with a note reading something like, ‘We miss you.'”

The menu has changed slightly because some food sources, like fried green tomatoes, have dried up.

“The quality of our food is 100% dead on,” Lamond said. “I overthought at the beginning, like I thought nobody wants french fries in a to-go box, but everybody does. It’s crazy.”

Lamond wants to thank residents for their support during this crisis.