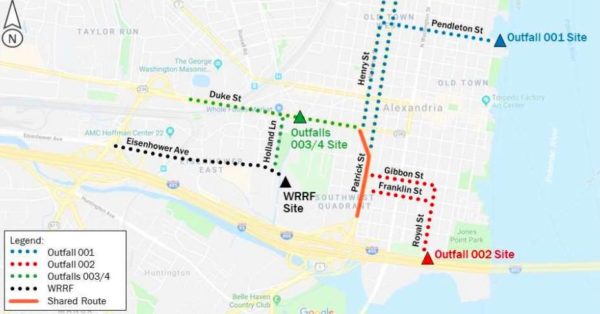 A global pandemic is not stopping forward progress on RiverRenew, a project that aims to overhaul the city’s sewer infrastructure that is annually dumps 11 million gallons of raw sewage into the Potomac River.

The project is the largest infrastructure project in the city’s history, with a price tag that increased last year to an estimated $464 million. The project recently cleared its environmental assessment by the National Park Service that was required because portions of the project run through Jones Point Park, George Washington Memorial Parkway and the bed of the Potomac River.

This #TunnelTakeoverTuesday, AlexRenew and the National Park Service announced the Finding of No Significant Impact…

The environmental assessment outlined several points of concern, like potential erosion and sediment, damage to historic parks, and noise generation. In each of these instances, however, the “no action” alternative that would result in continued dumping of sewage was considered more damaging and would violate legislation requiring the city to take action.

City Manager Mark Jinks said in a recent budget meeting that the project, being managed by AlexRenew, is not impacted by cuts made in the city’s budget.

The press release said that construction is planned to start this December — slightly earlier than had been initially scheduled — and is expected to last through mid-2025.

END_OF_DOCUMENT_TOKEN_TO_BE_REPLACED

More Stories
Planned King Street Childcare Facility Lets You Cowork With Your KidsALIVE! Has Another Food Distribution This Saturday and Needs Face Masks