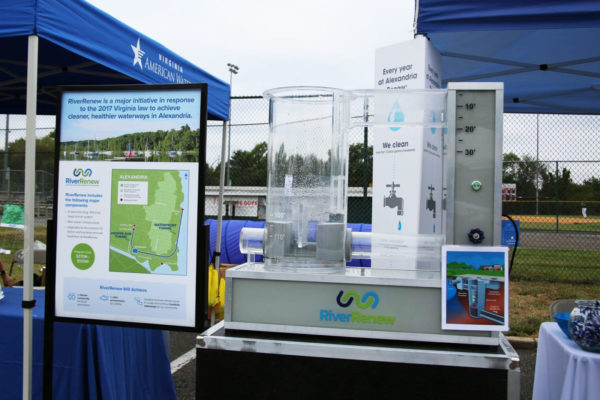 RiverRenew has a lot of tunneling to get through and not a lot of time.

Over the city’s objections, the state has required Alexandria to completely reform its sewer system by 2025. The city has assigned that task to Alexandria Renew Enterprises (AlexRenew), which in been pushing forward with RiverRenew — the largest infrastructure project in Alexandria’s history, estimated to cost between $370 and $555 million. 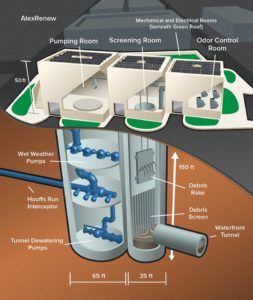 The pieces of the project are coming together, but the clock is ticking. Caitlin Feehan, program manager for RiverRenew, said that experience from other tunneling programs puts the estimated construction schedule at four and a half years, which includes accounting for construction delays.

To accomplish the project before the deadline, Feehan said her team is working to get as much of the red tape checked off simultaneously.

Environmental assessments earlier this year helped establish the plans for building tunnels underneath Old Town to carry sewage to a new pumping station at AlexRenew’s Water Resource Recovery Facility at 1800 Limerick Street. The pumping station — which will run 150 feet below ground — was approved by the City Council in September.

There were some concerns earlier this year that the federal government shutdown could hurt the timeline for the environmental assessment, Feehan said, but the program was able to work with the National Park Service to keep the process moving forward.

“It’s a challenge to make sure we’re on schedule,” Feehan said, “but [we have an] experienced staff that knows how to mitigate risk.”

Feehan said various teams will come in, go through the process of finishing out final designs for the project, then get permits

Currently, construction is scheduled to start in mid-2021. Feehan said teams will use a state of the art tunneling machine that will be drilling 100 feet underground — deep enough that the underground activity should cause no disruption on the surface. RiverRenew will also be working simultaneously on the new pumping station to ensure that the project is ready to go online as soon as the tunnels are ready.

The final result, Feehan said, will be sewers that capture 98% of discharge sewer flow — as opposed to dumping millions of gallons of sewage into the Potomac River when it rains — putting the city sewer system in compliance with the state’s demands.