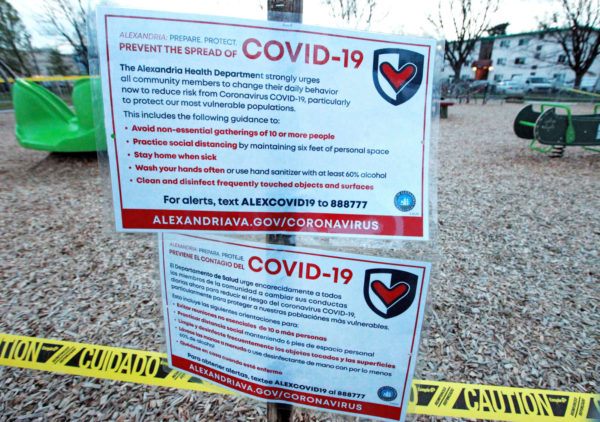 A testing update, the deferral of school construction projects and the impact of COVID-19 on Alexandria’s real estate market were just a few of the topics discussed last night (Thursday) in Mayor Justin Wilson’s weekly virtual town hall.

Wilson reported that there are currently 24 people with COVID-19 in the Alexandria Hospital, and that the nearly 300 other patients are recuperating at home or elsewhere. He also said that the hospital system will be able to handle the current rate of infection.

“So far, we’ve seen 1,234 tests that were performed in Alexandria in the city and the Inova system has been giving us data regarding the tests they’re performing,” Wilson said. “They have performed 5,700 tests total. And of those, 1,360 were positive, 3,709 were negative. They have 226 patients currently hospitalized across the entire [Northern Virginia] system, and they’ve seen 39 deaths within the Inova system, and they’ve discharged 305 patients so far.”

Economically, the city is contending with cutting an eighth of its budget, which is about $100 million by implementing a hiring freeze, eliminating employee compensation and deferring school projects. Additionally, Virginia received about $3.3 billion in federal CARES Act funds to reimburse localities, however the money will not solve the city’s financial woes.

“That money is only for new expenditures related to COVID-19, not things that we have funded or budgeted for previously,” Wilson said. “It won’t deal with our most significant financial challenge, which is essentially the loss of a dramatic portion of our revenue.”

Proposed budget cuts include delaying construction of the expansion of T.C. Williams High School’s Minnie Howard campus for “a few years,” Wilson said, adding that waterfront flood mitigation work and a number of other school facility projects will be put on hold.

Wilson added that making budget cuts are easy, but the trick is bouncing back.

“During the worst of the Great Recession, we deferred a lot of capital, and it’s a very easy game to play when you are in a difficult time. It’s a very hard game to catch up from,” he said. “We’ve spent really, the better part of the last decade catching up… In the end we’re in a very very difficult revenue situation and it’s not going to get better very soon.”

On evictions, Wilson said that there were 73 evictions pending in the city when the pandemic struck on March 11, and that those evictions are on hold, and he guessed that the judicial emergency will continue and that the Supreme Court of Virginia’s freezing of evictions and other non-essential cases will continue.

“We’re seeing a lot less houses on the market. The prices are actually don’t seem to be going down too much just yet,” he said. “But as the job losses mount and all the impacts that we’re seeing filter into the real estate market, that’s going to leave a big mark on the city’s budget, so what we’re dealing with right now compared to what we may have to be dealing with next year becomes child’s play, if it really hits the real estate market hard.”

As far as the city’s annual birthday celebration in July, the program is still planned.

“We haven’t even gotten past next week, so we’ll worry about July probably later,” Wilson said. “But so far, so far we’ve not changed that. Let’s see.”